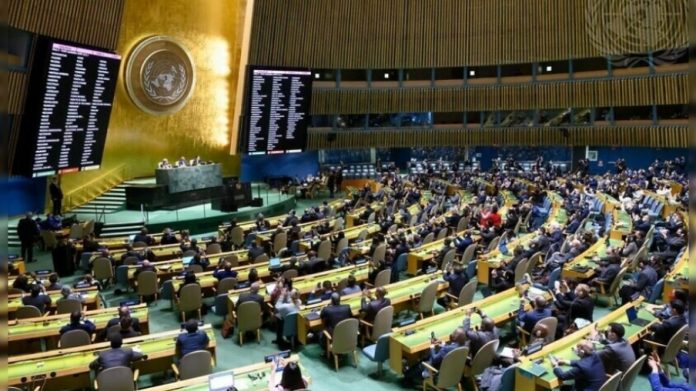 Source: JNS Published 4 Jan 2023. The Conference of Presidents of Major American Jewish Organizations have slammed the U.N. General Assembly (UNGA) for working to sanction Israel for protecting its civilian population.

The Conference put out a statement condemning the UNGA’S latest resolution that calls on the International Court of Justice (ICJ) to investigate Israel.

“No other member state in the history of the U.N. has faced this level of incendiary scrutiny,” the Conference said in an issued statement.

The resolution called on the International Court to “render urgently an advisory opinion” on Israel’s “prolonged occupation, settlement and annexation of Palestinian territory.”

“The Conference of Presidents condemns the United Nations General Assembly’s latest disgraceful resolution and abuse of the International Court of Justice which follows a pattern of distorted attacks by the body that unfairly singles out the world’s only Jewish state solely for fulfilling its obligation of protecting its civilian populations through defensive military action, in accordance with international law,” the organization said.

The Conference went on to praise those U.N. member states that changed their stance from a preliminary vote in November to oppose the resolution so that it no longer enjoys an absolute majority.

“We salute those eight countries that changed their votes from either supporting the resolution or abstaining to opposing it: Albania, Costa Rica, the Democratic Republic of the Congo, Kenya, Papua New Guinea, Romania, Togo and Great Britain,” the statement continued.

The Conference of Presidents also commended countries including Samoa “for switching their votes and refusing to support this heinous resolution”.

“Israel’s civilian population continues to face an unprecedented threat in the form of regular rocket attacks by Hamas and other terrorist groups,” the statement continues.

“No other member state in the history of the U.N. has faced this level of incendiary scrutiny for exercising the right to defend itself from existential threats. These biased inquiries have been further amplified—and revealed for the farce that they are— by virulent antisemitic outbursts of U.N. members in key leadership positions. We unequivocally condemn this attack and others like it and urge the ICJ to reject this overstep by the U.N. body,” the Conference of Presidents concludes.