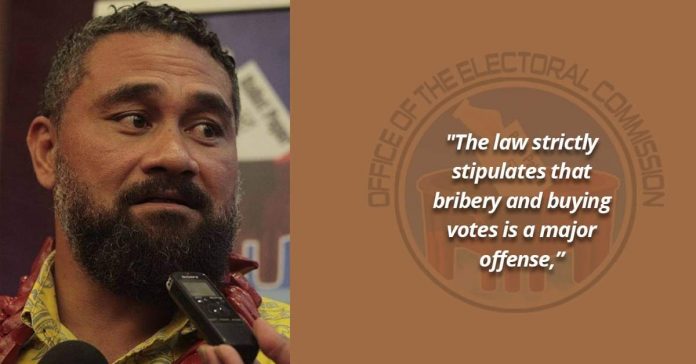 Bribery which covers monetary gifts, food or the common offering of lunch is off the books and a violation of the Electoral Act. Simply put, it is illegal and labeled as an election bribery under the law with a maximum penalty of five years imprisonment if convicted.

The recipients of gifts given as a bribe also stand to be prosecuted under the law with similar penalties, if found guilty.

With general elections now four months away, Samoa’s Electoral Commissioner Faimalomatumua Mathew Lemisio is reminding voters and candidates, to be mindful of the law.

In an interview with the Savali, the Commissioner noted that campaigning in the form of billboards, television advertisement, talk shows on radio and television, flyers and brochures are allowed within the specified period for media and promotional campaigning.

That period, however, ends on Sunday 4th of April, five days before the 9 April election day.

Faimalomatumua says this same period five years ago was a high risk period, where it was noted in the 2026 election,  candidates would deliberately turn a blind eye and suddenly become oblivious to the Electoral Act.

“The underlying factor is that we want an election that has been done cleanly. That means no bribery,” he said.

“There have been candidates in the past, who had to be removed and charged for bribery”.

“The law considers a running candidate paying someone a bribe, and a voter accepting a bribe as the same offence. The consequences if caught are the same, and that’s five years in a jail cell,” he added.

The Commissioner urges the public eligible to vote to make wise choices.

The Electoral Commissioner thanked Village Councils for supporting the OEC in its mission to educate the voters through various community programs.

“All those are allowed. But bribery and buying votes, the law strictly stipulates that this is a major offense,” he added.

Campaigning – Approved Methods (excerpt from May 2020)

In terms of campaigning, the Electoral Act outlines the approved methods that are lawful when the campaign period starts after the nomination of candidates.

The approved methods for campaigning under S42(2) of the Electoral Act focuses on the publication of issues and the promotion of a candidate’s key messages for elections. These are the only methods of campaigning allowed under law.

S42. Approved methods: (1) A candidate must only use the approved methods of campaigning provided under subsection (2). (2) The approved methods for campaigning are as follows: (a) handing out of pamphlets providing the candidate’s – (i) personal background; and (ii) academic qualifications; and (iii) issues for which he or she supports; (b) use of billboards to provide a pictorial presentation of the candidate and issues of which the candidate wishes to inform the public; or (c) oral or filmed presentations or speeches using any mode of communication available which includes electronic devices. (3) In this section “electronic devices” means any device that can be used to promote a candidate’s message for elections.