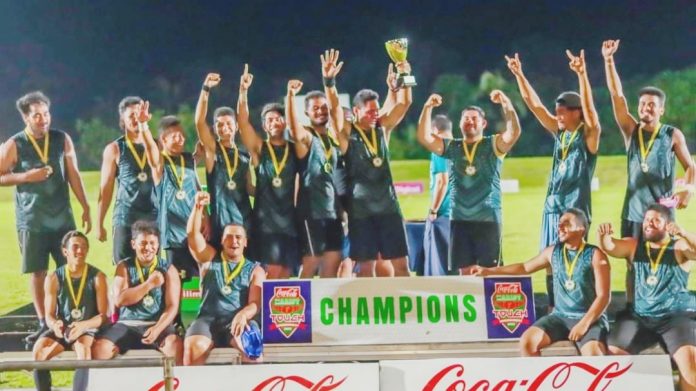 This year’s Coca Cola Marist International Touch tournament tapped off to a good start with Konnexion taking out the Men’s Division in a close 1-0 final against Nofo Swifters.

“To God be the Glory, Forever and Ever, Amen!” chanted the new Men’s division champions as they lifted their Cup to conclude Day 1 of the tournament at Tuanaimato’s soccer fields on Friday night.

In response to questions from Samoa Global News, Marist Touch Tournament Director, Taupau Alex Mikaele said the goal is to ensure that Marist is able to provide an inclusive platform that is similar to international stages, for local athletes to showcase and develop their talent.

“It is our hope to have these platforms developed in order to assist Samoa Touch Rugby Incorporated in preparing our athletes, for the upcoming 2023 Pacific Games in Solomons, as well as World Cup International Stages,” said Taupau.

“Every year there is always something unique that happens,” observes the Tournament Director.

“The final whistle blew; and a new champion was declared..

“To God be the glory for his grace upon this tournament.”

The International Event was originally planned for March 2022, but due to the Covid-19 pandemic and lockdowns within the country, the event was rescheduled to October, to be hled before the festive season.

“Marist Touch under the umbrella of Marist St Joseph’s Sports Club Samoa stands firm with its motive and ambition to assist the Samoa Touch Rugby Incorporate (STRI) in developing Touch within our Communities,” said Taupau.

“In addition, the Marist Touch have incorporated all International Standards and regulations being applied by the Federation of International Touch (FIT)..

“These standards are in terms of matches, refereeing, logistics and most importantly, the standard of the tournament delivery,” said the Tournament Director.

The tournament continues into Day 2 on Saturday with the Mixed and Women’s Divisions.

“Marist Touch hope’s to continue with its rhythm and ensure the platform is well enjoyed by our players, spectators and to everyone who is tuning in live.”

All the action of the Coca Cola Marist Touch can be watched online via TV3 Samoa Broadcast Youtube Channel.

Taupau acknowledged the tournament sponsors and development partners who helped make this event a success.

2. Government of Australia through the PacificAusSports