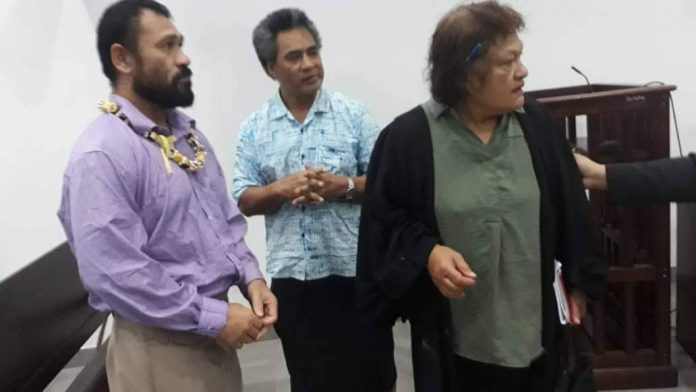 Justice Mata Tuatagaloa has ruled that the bail hearing for the two men accused of an alleged plot to kill Prime Minister Tuilaepa Sailele Malielegaoi shall be closed to the public and the media.

Samoa First election candidate Lema’i Faioso Sione and Malele Paulo aka King Faipopo have both denied the charges that alleges they conspired and approached Taualai Leiloa of Maagiagi and convicted murderer Alatise Vitale to assassinate the Prime Minister of Samoa.

It was confirmed today that Alatise Vitale and Taualai Leiloa would both be giving evidence as prosecution witnesses at the bail hearing.

The Court has ruled that the matter be heard in closed Court as per Article 9 of the Constitution that it is in the interest of Justice that the public and the media be excluded from these proceedings (due to the nature and sensitivity of the information involved.

The decision also states for the “Court to exclude information given or obtained in confidence pursuant to Section 59 of the Evidence Act 2015. It is in the interest of Justice that such an order be made given the nature of proceedings, the nature of the charges and the safety and well being of the victim and other parties involved.”

Taualai and Alatise have also been granted the ability to present their evidence by way of affidavit to avoid cross examination by defense.

Justice Tuatagaloa states that the proceedings are complex and would be treading on matters unrelated to the bail hearing, adding that ongoing Police investigations regarding the other co-conspirators could be compromised.

Justice Tuatagaloa has further prohibited the publication of any report or account of the whole proceedings of the bail hearing.

Speaking to the media outside Court Unasa said that they would be considering an appeal and that the media should be allowed, as the eyes and ears of the people.

“My submision is for an open court ona e fia afe tagata, they rely on the news, but now it is gagged and before a gagging order is done it has to be a full hearing where the media is represented; that was my submission but ga shut down lava a’u fai mai e ese Niu Sila ese iinei but this is an international thing,” said Unasa.

She added that the media could help turn the decision around if they wished to appeal the decision.

“We got what we wanted but it’s the media…this is why in New Zealand the media will be the eyes of the public and you know e toe sui a e le media le mea lea, pe a faapea e apili le media;

Josephine Fuimaono Sapolu suggested that a joint submission be put to the Ministry of Justice to support the presence of media in Court.

“Maybe we can put that to the Ministry of Justice, and maybe a joint letter from the journalists to the CEO. We would like a table in all court rooms for the media to sit, because you are representing the people”, she said.

“At the media table you can bring all your devices to record and you can ask for your camera up there to record, so that you’re able to give out the correct information for our people to know and understand”, added Josephine Fuimaono Sapolu.

The bail hearing date will be set for after Taualai Leiloa and Alatise Vitale have been sentenced.