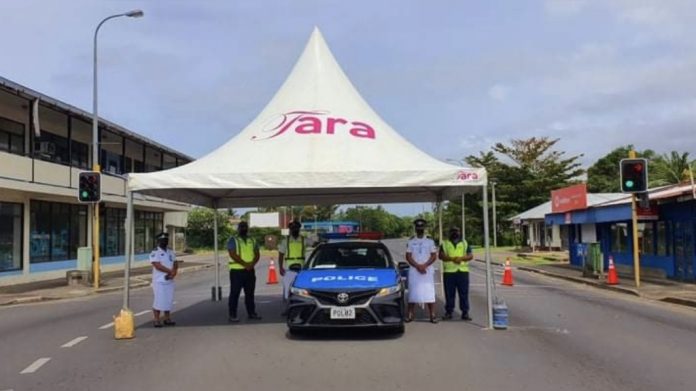 Saturday 9 April 2022, Apia Samoa.  As of Friday afternoon, 294 members of the Samoa Police, Prisons and Corrections Services (SPPCS) had tested positive for covid-19. The good news is that 128 officers have recovered, while 166 remain in isolation.

Samoa has been in a perpetual State of Emergency status since the 20th of March 2020, and the Samoa Police have been tasked with enforcing SOE Orders for the past two years. As the national State of Emergency is extended a further month, officers in the frontline of enforcement and safety, are feeling the impacts of the community outbreak.

Deputy Commissioner Auapaau Logoitino Filipo, however, continues to remain positive. While confirming the latest numbers, he says they are encouraged by the recovery rate within their three isolation locations, and all 166 recovered officers have rejoined their teams and resumed duties.

The Samoa police have taken a focused approach to the welfare of officers affected, allowing them to recover in three isolation locations, specifically set aside for members.

“We have been monitoring the situation closely on a daily basis, but very early on, we made the decision to establish our own isolation sites for officers, and they have been recovering well there,” said Auapaau. “Amongst each isolation group are trained officers, able to conduct testing and basic healthcare.”

All positive cases of SPPCS are recovering at Lynn’s Getaway, Rita’s Lodge and Vaiala Beach Cottages, said Auapaau. “We do give them the option of going home to recover, and some have opted to, as long as their families are safe.”

Deputy Commissioner Auapaau says the majority of the positive cases are officers in the frontline of dealing with members of the public, at checkpoints and on duty at testing sites.

He reiterates that the SPPCS leadership team are on top of the situation and there is no need to be alarmed. Auapaau said the positive cases are part of the 881 officers who have been in camp since the beginning of the national lockdown.

“There are now three large halls in the Apia area being used by the Ministry for duty officers in camp. We separated the camps to ensure we contain the spread amongst our frontline officers.”

Samoa’s frontline law enforcers are camped at two large halls which Auapaau said they called around to secure for the police camp. “We requested the use of the HRPP Hall at Petesa and the Catholic Hall at Taufusi, and the third group are camped at our Fagalii location”.

Auapaau said their leadership team have also grouped into bubbles, with daily briefings on all areas of operations.  He added that Samoa police are in regular contact with their counterparts in the Pacific region, who are sharing their own experiences on different strategies and approaches to national security during covid.

“We have daily briefings via zoom to make sure we all remain on top of the updates of all operations. Our counterparts in the region have been able to share their lessons learnt with us, and there have been many useful approaches we’ve been able to consider and adapt.”

“We continue to commend our frontline officers for the high level of commitment they continue to show,” said the Deputy Commissioner. “And we thank their families for the sacrifices made at this time. Even with the risks, our Officers remain eager to continue to work.”