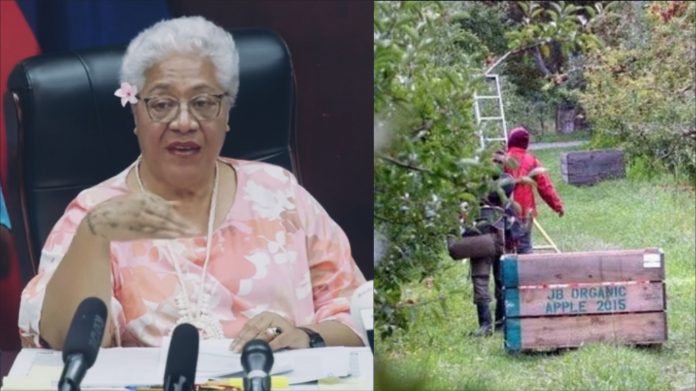 The popular seasonal worker scheme that provides short term employment to help with labour shortages in New Zealand and Australia is currently undergoing a comprehensive review by the new administration.

In a press conference last week, Samoa Prime Minister Hon Fiame Naomi Mataafa said a multi-level approach is being taken to review all aspects of Samoa’s participation in the schemes.

Fiame said there are high-level bilateral discussions between governments, and then there is the administration and coordination being carried out on the ground. On another important level is that of managing expectations between local workers and overseas employers.

The Prime Minister said one of the elemets being reviewed is if the Ministry of Commerce Industry and Labour – MCIL – is the right place for seasonal worker administration.

The Prime Minister pointed to the many issues that have arisen of late, and said Cabinet is seeking to better understand the root cause of these problems before laying foundational policies to guide the future administration of the schemes.

The Samoa Prime Minister said there was a notable increase of issues arising out of the Australian programme and Cabinet is taking a deep dive to analyse these.

Fiame said unlike New Zealand, Australia has State Laws that may be different from Federal Laws. So from the perspective of employment relations, it is important to understand the jurisdicition our workers’ contracts fall under.

In terms of numbers, the Prime Minister said Cabinet has approved 619 seasonal workers to depart Samoa in October while 1,047 have been approved for November.

These numbers says Fiame, are based on the recommendations put to Cabinet from the Ministry.

Previous reports that Cabinet was pulling back on seasonal worker numbers was clarified by the Prime Minister.

During border closures there were organised chartered flights for seasonal workers, however, with borders now re-opened, seasonal workers are back to booking seats on commercial flights currently being operated by Air New Zealand, Qantas and Fiji Airways.

Regarding media statements by Cabinet Ministers on local television networks that the selection process will be given to constituency districts to lead, the Prime Minister further clarified that the review would result in foundational guiding policies and until that stage is reached, the scheme continues as before.

The Prime Minister stressed that the seasonal worker programme is supposed to target the unskilled and unemployed, however, the private sector have submitted concerns about losing trained employable labour to seasonal work. A concern shared by some government departments.

When the tourism industry highlighted the loss of trained labour as a concern during a sector consultation earlier this year, Tuatagaloa Joe Annandale had gently pointed out the disparity in salaries and benefits for workers.

He said the money earned by seasonal workers over a six-month contract abroad, was the equivalent of working several years on local rates.