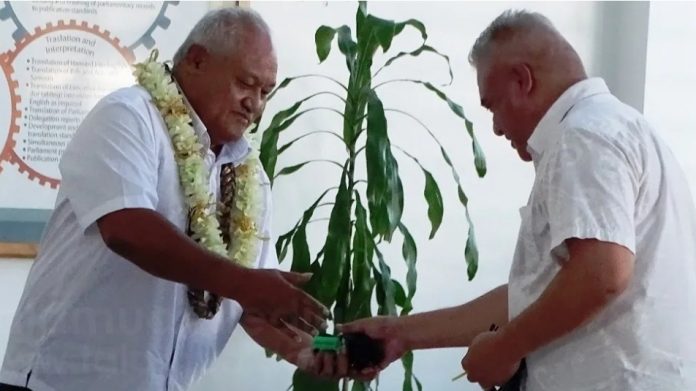 The image of the Clerk of the Legislative Assembly, Tiatia Graeme Tualaulelei handing over the keys of the Maota Fono which was locked on the morning of the 24th of May, was symbolic of the end of Samoa’s political crisis.

A traditional ceremony allowed for a warm exchange of words and encouragement between the new Speaker and the OCLA management and staff.

The Speaker acknowledged the past few months of uncertainty and thanked the OCLA team for their patience. Papali’i Li’o and Auapa’au also handed over a monetary gift of $1,500 tala in exchange for the preparation of all the faaaloaloga given to them.

Tiatia mentioned the state of the vehicles assigned to the incoming Speaker and Deputy, saying that the vehicles were the same ones used by former heads of the Legislative Assembly since 2015.

“I hope once Parliament passes the budget, we may be able to upgrade the offices and vehicles,” said Tiatia.

Himself a lawyer, Papali’i Li’o called for unity in the spirit of  working together, and reminded the OCLA team of Parliament’s important role to enact laws as set down by the Legislative Assembly.