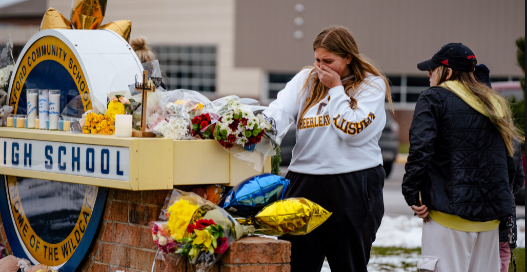 The gun was an early Christmas gift from his parents: a semiautomatic 9-millimeter Sig Sauer handgun. “My new beauty,” Ethan Crumbley, 15, called it.

The day after Thanksgiving, he and his father had gone together to a Michigan gun shop to buy it. He and his mother spent a day testing out the gun, which was stored unlocked in the parents’ bedroom. On Monday, when a teacher reported seeing their son searching online for ammunition, his mother did not seem alarmed.

“LOL I’m not mad at you,” Jennifer Crumbley texted her son. “You have to learn not to get caught.”

A day later, the authorities say the teenager fatally shot four classmates in the halls of Oxford High School in suburban Detroit, using the handgun his parents had bought for him.

On Friday, Karen D. McDonald, the Oakland County prosecutor, laid out those and other chilling details as she took the rare step of filing involuntary manslaughter charges against the suspect’s parents, James and Jennifer Crumbley.

Ms. McDonald said the Crumbleys were culpable in the year’s deadliest school shooting because they had allowed their son access to a handgun while ignoring glaring warnings that he was on the brink of violence

Law enforcement officials said that the parents had gone missing on Friday afternoon, leading to a manhunt that involved the county’s fugitive-apprehension team, F.B.I. agents and United States Marshals. Early Saturday morning, after receiving a tip, the police arrested the parents after finding them in a commercial building in Detroit. Later that morning, the couple were arraigned, listening to the charges by videoconference. They pleaded not guilty to all charges.

Lawyers for the parents said the Crumbleys had not fled, but had left town for their own safety and were planning to return for the arraignment, attributing the confusion to a miscommunication with the prosecutor’s office.

Ever since the 1999 attack at Columbine High School, the parents of children who commit school shootings have come under scrutiny over missed warning signs and whether they should bear some blame. But they are rarely held criminally responsible in the raw aftermath of a school shooting, even though many underage attackers arm themselves with guns from home.

But in an extraordinary news conference, Ms. McDonald recounted a nearly minute-by-minute litany of missed opportunities to intervene — including how the suspect’s parents had been alerted to a disturbing drawing he made containing violent images and a plea for help just hours before the shooting.

“I am in no way saying that an active shooter situation should always result in a criminal prosecution against parents, but the facts of this case are so egregious,” Ms. McDonald said.

On the morning of Tuesday’s shooting, the suspect’s parents were urgently called to Oxford High School after one of his teachers found an alarming note he had drawn, scrawled with images of a gun, a person who had been shot, a laughing emoji and the words “Blood everywhere” and “The thoughts won’t stop. Help me.”

School officials told the parents during the in-person meeting that they were required to seek counseling for their son, Ethan, Ms. McDonald said. The teenager’s parents did not want their son to be removed from school that day, and did not ask him whether he had the gun with him or search the backpack he brought with him to the office, Ms. McDonald said.

“The notion that a parent could read those words and also know their son had access to a deadly weapon, that they gave him, is unconscionable, and I think it’s criminal,” she said.

A few hours later, authorities say, Ethan Crumbley moved from ominous words and drawings into actual bloodshed. At 12:50 p.m., the authorities said, he walked into a bathroom carrying his backpack, emerged with the handgun and began to fire.

At 1:22 p.m., as news of the shooting tore through Oxford, prosecutors said, Jennifer Crumbley texted her son: “Ethan don’t do it.”

But it was too late.

At 1:37 p.m., James Crumbley called 911 to say that a weapon was missing from his house, and that his son could be the gunman at Oxford High, prosecutors said.

Law enforcement officials say the gunman fired more than 30 rounds before he was apprehended. He has been charged with terrorism and first-degree murder in the deaths of Tate Myre, 16; Madisyn Baldwin, 17; Justin Shilling, 17; and Hana St. Juliana, 14. Seven other people were wounded.

On Saturday at the arraignment, the defense lawyers the prosecutor’s version of events, emphasizing that the assertion that the gun was easily accessible in the Crumbley home was not accurate.

“The court is only aware of the facts the prosecution has presented, but that gun was actually locked,” Shannon Smith, one of the defense lawyers, said. She also said that “there is far more going on than what this court has been made aware of.”

A lawyer for Ethan Crumbley pleaded not guilty on his behalf this week. Parents across the country have been charged with child abuse, violating gun laws and even negligent manslaughter after their young children accidentally shoot themselves or other children. But gun control experts said Ms. McDonald’s move to charge the parents of a mass shooting suspect was almost unheard-of.

“I can’t think of a high-profile mass shooting where the parents were prosecuted,” said Allison Anderman, director of local policy at the Giffords Law Center to Prevent Gun Violence.

In western Kentucky, there were calls three years ago to prosecute the stepfather of a 15-year-old school shooter after the authorities learned the teenage gunman had obtained his stepfather’s handgun from an unlocked bedroom closet.

But the local prosecutor, Dennis Foust, decided he could not make a case against the stepfather. Kentucky law makes it a crime to “intentionally, knowingly or recklessly” provide a handgun to a minor — a high standard to prove. Mr. Foust said the stepfather did not know the gun was gone until questioned by investigators after the shooting.

“I’m a firm believer in gun responsibility, but we just didn’t see there was enough there,” he said.

Mr. Foust said that local law enforcement also opposed charging the stepfather with a crime and wanted to keep the focus of the prosecution squarely on the gunman, who is serving a life sentence after killing two classmates.

There needs to be accountability,” Mr. Foust said. “But under our situation, we weren’t able to do that. I don’t know that society, at least here, would effect sufficient change to be able to prosecute a parent.”

Gun control advocates say that lax gun storage leads to suicides, accidental deaths and intentional school shootings. But legal experts say a patchwork of state laws — some stringent and some lax — regulating gun storage and children’s access to weapons can pose a hurdle to prosecutions.

Kris Brown, president of the gun control group Brady United, said that Michigan, unlike nearly 30 other states, did not have what was known as a child-access prevention law requiring adults to keep any guns in their home out of the reach of children.

“The idea is that if you have a kid in the home, even if it is not your own kid, any firearm needs to be stored safely — which means unloaded, locked and separated from any ammunition,” Ms. Brown said.

States like California and New York set tougher safety standards for gun owners while more gun-friendly states in the Southeast impose penalties only if a child actually obtains or fires a gun.

“Michigan doesn’t have a strong law or a weak law,” Ms. Brown said. “It has no law on this.”

Ms. McDonald’s decision to charge the accused gunman’s parents was widely praised by gun control groups, who have long argued for tougher gun storage laws and stricter penalties to keep guns away from children.

Many states, including Michigan, do not have laws requiring guns to be locked away, and experts say prosecuting a gunman’s family members in the raw aftermath of a mass shooting can raise divisive questions pitting Second Amendment rights against gun safety.

Prosecutors may next turn their attention to the culpability of the school.

Michael Kelly, a Northville, Mich., lawyer who frequently represents expelled students, said that the warning signs should have led the school to take more decisive action, but that because the accused shooter had no prior disciplinary record, the school’s failure to act more decisively might fall into a legal gray area.

Mr. Kelly predicted that the Oxford school district could face lawsuits similar to those filed against other schools after mass shootings. After the 2018 shooting at Marjory Stoneman Douglas High School in Parkland, Fla., families of the victims filed dozens of lawsuits against those they argued could have prevented the attack.

The revelations on Friday quickly compounded the anger of students and parents in the suburban Detroit village of Oxford who have accused school officials of failing to prevent the shooting rampage.

“Everybody should be angry,” said Renee Guzanek, whose daughter sheltered in an office during the shooting. “It certainly sounds from what the prosecutor says that there was an opportunity for this to be disrupted and it wasn’t.”