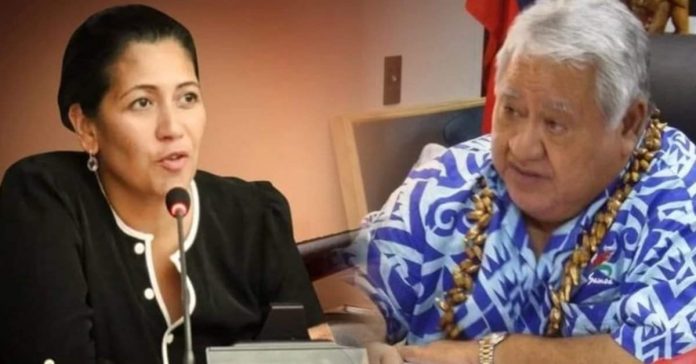 Justice of the Supreme Court Tafaoimalo Leilani Tuala-Warren has issued a warning against any person connected to a Court proceeding from writing to a presiding judge.

Before the start of a bail hearing in the Supreme Court last Friday, Justice Tafaoimalo brought a letter written by the Samoa Prime Minister, to the attention of Counsel.

“I had been copied into inappropriate correspondence by one of the parties to these proceedings, the complainant,” said Justice Tafaoimalo.

“As you know, communication of this type to a judicial officer is inappropriate from any party or person connected to any Court proceedings;

“This is because such correspondence has the potential to undermine confidence in the justice system, the integrity of the criminal process and can prejudice an accused’s right to a fair and impartial trial,” said Justice Tuala-Warren.

The Supreme Court Justice had presided over bail applications of two men charged with conspiring to murder the Samoa Prime Minister; and on the 28th of February 2020, Tafaoimalo granted bail with strict conditions, to Lema’i Faioso Sione and Malele Paulo.

Prime Minister Tuilaepa Sailele Malielegaoi, angered by the judge’s decision, penned a letter dated 9 March that makes derogatory remarks about the the Supreme Court Judge’s decision. Tuilaepa demands to know why a monetary bond was not imposed as part of the bail conditions. (It is worth noting here that Courts in Samoa only ever impose monetary bonds when defendants apply to leave jurisdiction, otherwise surrender of travel documents is the norm).

The Prime Minister’s letter also attacks the delay in Court proceedings, saying the hearing date of 9 November 2020 was too much of a delay. He goes on to demand a list of all pending cases within the criminal Court system.

Lema’i and Malele Paulo aka King Faipopo were arrested in August 2019, and charged together with Taualai Tuilaepa Leiloa and Australian-Samoan Talalelei Pauga in relation to an alleged plot to assassinate the Samoa Prime Minister. Both men have entered pleas of not guilty.

As it turned out, Lema’i Faioso Sione was taken back into custody on the 16th of March, having failed to sign in at the Faleata Police station on Friday 13 March because he had traveled to Savaii for the weekend.

“I informed Counsel that I had chosen to ignore the correspondence as it has no bearing on the matter before me”, said Tafaoimalo.

Justice Tafoaimalo issued a reminder that anyone who is unhappy with a decision of the Supreme Court of Samoa, is free to file a petition with the Court of Appeal.

“I urge Counsel to address this issue with the parties, in particular the inappropriateness of a party to a proceeding writing to a Judge”, said Justice Tuala-Warren.

“Any issues that parties may have must come through Counsel and of course, if a party (in this case, the prosecution or the accused) is dissatisfied with any decision of the Court, the party may appeal the decision to the Court of Appeal”.