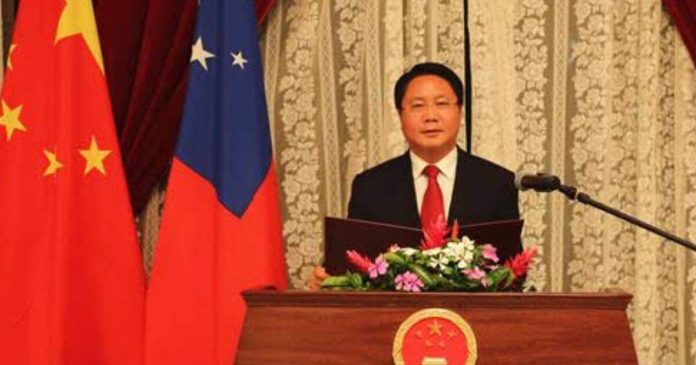 27 January 2019, Apia Samoa. MP Olo Fiti Vaai called on the Samoa government to take down Chinese flags seen flying at various construction projects. This followed an article on the front page of the Samoa Observer titled “Chinese Flag Angers MP” together with a picture of three flown flags including a Chinese National Flag with caption: “Remove the Chinese Flag.”

The article reported Olo Vaai stating that it does not make any sense to allow the Chinese to fly their national flag in Samoa “when the projects are being funded by loans which Samoan taxpayers will ultimately repay.”

The article goes on to state Olo’s claim that “these are not aid, these projects are all part of the $410 million debt owed to China”.

Chinese Ambassador to Samoa His Excellency Wang Xuefeng has sent out a public statement to all media, that corrects claims made by MP Olo Vaai and outlines China’s urgent grant aid assistance to support Samoa’s preparations to host the upcoming Pacific Games.

The Ambassador’s letter uses direct language to clarify matters, is informative and attempts to address existing mindsets and attitudes towards Chinese assistance that is often tainted with rumours and speculation about the nation’s intentions.

“The article contains many ignorant and ridiculous remarks, which obviously deviated from the facts and truths. Chinese Embassy in Samoa would seriously point out the untruthful and ignorant errors.

“Firstly, the on-going project of the gymnasium at Tuanaimato is a grant aid project of the Chinese government in support of Samoan Government in hosting the 2019 Pacific Games, which has nothing to do with loans and debts of any kind. Therefore the statement that “these projects are all part of the $410 million debt owned to China” is a totally ungrounded rumour.

“Secondly, the picture with three flags in the article is not a complete picture at all. The fact is, there are flags on both sides of the gate of the constructions site of the gymnasium at Tuanaimato including both a Samoan National Flag and a Chinese National Flag.

“Thirdly, it is a common international practice to fly flags of both the donor country (or countries) and the recipient country on the cooperation project construction sites. The only purpose is to indicate friendship and cooperation between or among the countries.

“China and Samoa have been enjoying long-standing relationship for over four decades and China has always regarded Samoa as our good friend, good partner and good brother.

“Just as PM said: “There are six flags at the project site, yet he targeted the flag of the government of China, what’s so harmful about China’s flag? It’s a sign they are providing assistance to Samoa.”

“Furthermore, for those who have an issue with Chinese flags at project sites, you’d better go out and take a look around, you will see flags of different countries flying at other project sites funded by other countries or at premises of foreign ventures in Samoa.

“We would like to take this opportunity to share some information concerning the project of the gymnasium at Tuanaimato.

“As is known to all, this project is an urgent grant aid project from the Chinese Government at the request of the Samoan Government when it took over from Tonga to host the 2019 Pacific Games. The huge project has only seven months as the deadline is already fixed.

“It started only in late December 2018 and has to be completed in May 2019 with everything ready for the Pacific Games including all the interior decoration, all the equipment and facilities which will ensure the full function of the gymnasium. Anyone with common sense and conscience could imagine how difficult the task is and how much pressure the Chinese engineers, technician and construction workers are facing.

“In order to fulfill our promise to Samoan people, Chinese engineers, technicians and construction workers have been working together with some Samoan workers day and night, week days and weekends, sweating all over and taking little rest, only to make full use of all the time when there is no downpour during this rainy season.

“In order to save time, the massive roof structure of the gym has been assembled in China in the past few months and then shipped to Samoa. It is Chinese people’s sincere wish to present this gift of a modern gymnasium with international standards to Samoan people for the successful hosting of the Pacific Games.

“In addition to the grant aid project of the Gym, China will also provide grant aid assistance in various forms including vehicles, sports equipment and facilities, training of over 200 athletes and coaches and 30 chefs, training and rehearsal for the mass game at the opening ceremony, costumes for all the participants in the mass game, the supply of fireworks for both the opening and closing ceremonies as well as technical support in firework displays.

“All the above-mentioned assistance is of grant aid and has nothing to do with any loans or debts. Up to now, everything is going well.

“In fact, before the article was published, Chinese Embassy was contacted by Samoa Observer for comments on an individual’s remarks regarding Chinese flag on the project site of the gymnasium at Tuanaimato.

“At that time, Chinese Embassy would rather ignore the matter because it would be a waste of time to respond to some individual’s groundless, ignorant and ridiculous remarks. As a Chinese old saying goes: “If you only listen to trilling of mole crickets, you will never plant any crops.” (Mole crickets are pests that are harmful to crops).

“However, if anyone distorts the truths and facts in public, Chinese Embassy will set it straight so that the public will no longer be misled by wrong information or ridiculous and ignorant remarks.

“Let us remove the ignorant and ridiculous remarks that are harmful to the friendly relations of our two countries and let the flag of China-Samoa Friendship fly higher.