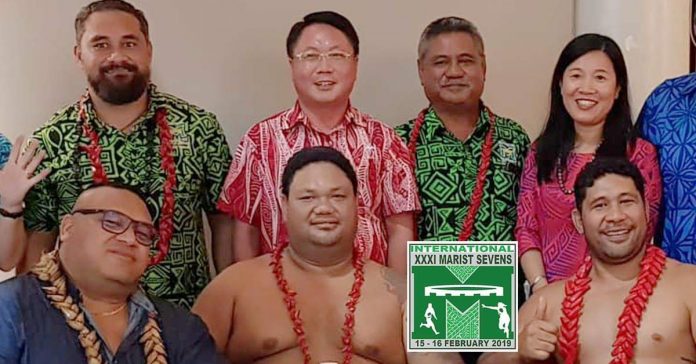 31 January 2019, Apia Samoa. Chinese Ambassador to Samoa His Excellency Wang Xuefeng is offering support to the Marist 7s Tournament for the second year in a row.

During the launch of the XXXI International Marist Sevens Tournament at Tanoa Tusitala last night, Ambassador Wang Xuefeng told Samoa Global News that he has embraced the Marist Family spirit and sport is an important avenue to reach youth and women development.

“This tournament has helped to develop many good players and that gives them an opportunity to represent Samoa and advance their careers. Supporting development of sports is another way to enhance the good relations between Samoa and China.”

“China is also very happy that Marist will include the Women’s competition again this year,” added Ambassador Xuefeng.

President of the Marist St Joseph’s Sports Club Faimalomatumua Mathew Lemisio confirms that the Woman’s competition will be included for the second year in a row with more interest from both local and overseas clubs.

“The Glen Feaunati Cup for the Women’s competition is up for grabs between 4 overseas and 4 local teams.”

“We are thankful to Ambassador Wang Xuefeng for continuing to strengthen the partnership between our 2 great countries under the banner of sport. His Excellency embraces the Marist family spirit,” added the Marist President.

The International Sevens Tournament is due to kick off at the ACP Marist sports grounds at Lotopa on the 15th February.

Tournament Director Fata Brian Kaio says that the 3 objectives of the international event, now in its 31st year, is to identify new rugby talent, prepare players for international representation and promote social stability through the empowerment of youth and women.