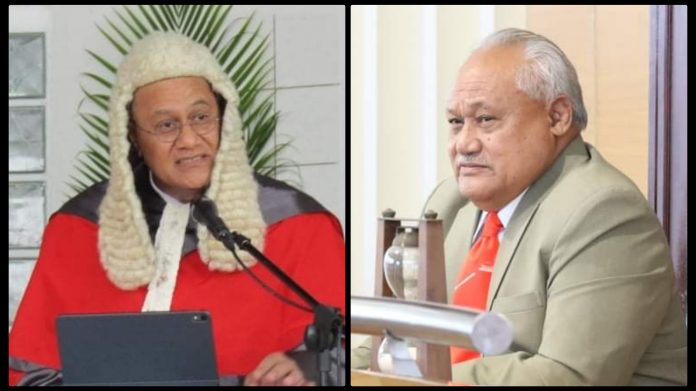 Samoa’s Chief Justice, His Honour Satiu Simativa Perese, questioned the use of the words “influx of women” in a Court submission by the Speaker of Samoa’s Parliament last Thursday.

His Honour raised the issue during the hearing of an application by two women candidates, seeking mandamus orders to direct the Speaker of the House to swear them in as members of Samoa’s parliament following their election by writ handed down by the Head of State.

“I do have a question in relation to your description of what is happening in so far as these queries and cases are concerned,” queried the Chief Justice.

Counsel responded that it refers to, the problem that would arise if there was no certainty, “and there would be more women, and that is not the intention of Parliament..”

“Our concern is, in that very same paragraph your Honour, it refers to the issue that once appointed, the initial members cannot be unappointed, so it leaves us with this uncertainty as to what to do, what does that mean?”

Unasa explained that the dilemma facing the Speaker is that if he swore in the two women, what would happen if they are deemed to be unqualified at a later time. “That is the issue that we are trying to avoid, and I suppose that there are also financial issues if we have too many, as the Law states, that six only are required to meet the 10% threshold”.

“Perhaps the words are not well chosen,” admitted Counsel, “but that is the problem we wanted to address in that particular paragraph.”

Chief Justice Satiu reminded Counsel that the Constitution talks about a minimum of 10%. “So there is really no bias, if there might be more than 6, there could be 7 or 8,” –  to which Unasa agreed.

“Thank you, I just wondered, because the submission “to avoid an influx of women cadidates” as if it were a bad thing,” said the CJ.

“That is not intended, sir.”

The Supreme Court was deliberating over what the Chief Justice described as important Constitutional matters, on the application of Article 44 of Samoa’s Constitution that allows for additional seats to ensure women’s representation in Parliament does not fall below 10%, as well as the Speaker’s role to swear-in elected members of parliament.

The Chief Justice sought to avoid having to hand down mandamus orders against the Speaker, and asked Unasa if the Speaker would conduct the swearing-in if the Court found Aliimalemanu and Faagasealii rightly appointed and eligible under the Law – to which Counsel replied, yes.

During rebuttals counsel for the two women, Tuatagaloa Aumua expressed his concerns with the use of the phrase, in light of International Women’s Day being celebrated that same week.

Counsel for the Speaker then apologised to the Court for the use of the word, “influx”.

Samoa currently has 4 women MPs, including Prime Minister Hon Fiame Naomi Mataafa, the Minister of Finance Hon Mulipola Anarosa Ale Molioo, the Minister of Justice Hon Matamua Seumanu Vasati Pulufana Sili and opposition MP and former Minister of Health, Faimalotoa Kika Stowers. The two women fighting to be sworn-in as MPs under the additional women seats allowed by in Samoa’s Constitution, are both from the Human Rights Protection Party and will join Faimalotoa to make it an even 3-3 between the two main political parties.

The Supreme Court has reserved its decision.