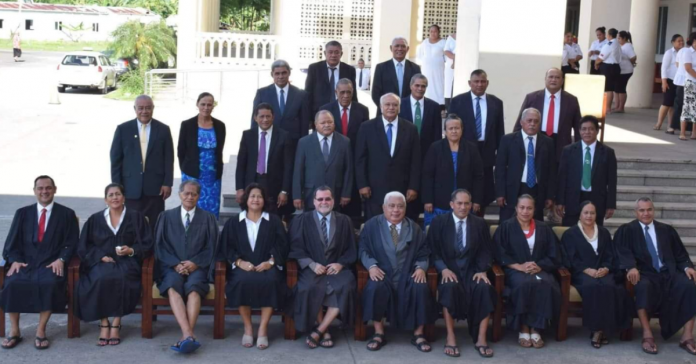 After 27 years of being the Chief Justice of Samoa Patu Tiavasu’e Falefatu Sapolu bid farewell to the Samoa judiciary in a special valedictory sitting of the Supreme Court earlier this week.

Chief Justice Patu retires after 43 years, being at the helm of the  at the Samoa Judiciary since 1992.

Patu during his farewell speech said that God has been his strength and inspiration during his term as Chief Justice.

“I beseech God for His blessing and guidance and that has been the source of strength and inspiration during my tenure as Chief Justice,” he said.

“The theme of my address at the time was based on the concluding word in the Judicial oath “Ia fesoasoani mai le Atua ia te a’u.”

The outgoing CJ recalled that he had not accepted the appointment to be Samoa’s CJ straight away.

“I never had any wish or aspiration to be a Chief Justice, when I was approached for the position;

“As a matter of fact it took me a whole month to consider my options before I accepted the proposition,” he said.

“So I don’t deserve the kind remarks that has made by the Attorney General and the President of the Samoa Law Society this morning;

“But there is someone above me that the glory and the praise should be made unto.”

Patu acknowledge the late Prime Minister Tofilau Eti Alesana for trusting him to take on the post of Chief Justice for Samoa.

Attorney General Lemalu Hermann Retzlaff and the President of the Samoa Law Society during their speeches acknowledged the work of Chief Justice Patu over the years.

Lemalu highlighted some of the developments and changes made to the Judiciary system.

Lemalu paid trubute to the drive of Chief Justice Patu which led to the establishment of the Alcohol & Drugs Court, Family Court, Family Violence Court, Youth Court and the Coroner’s Court.

“It is your overall contribution to the Justice System of Samoa that has in fact led access of justice for all of Samoans,” said Lemalu.

Leiataualesa said in his speech that the knowledge and understanding of the law is something that Chief Justice Patu will always be remembered for.

“It is your knowledge and understanding of the law that will become part of your legacy left behind for the Society, in what has been a remarkable career,” said the President of the Law Society.

Patu’s Judiciary Career:
Patu attended Marist School in Mulivai and later continued to St Joseph’s College where he was the top student for both his Primary School and College life.

He graduated from Auckland University with a Law Degree on 1975, together with a Bachelor and Master of Arts.

He came back to Samoa and was working as a legal officer at the Office of the Attorney General before hus appointment as AG in 1984.