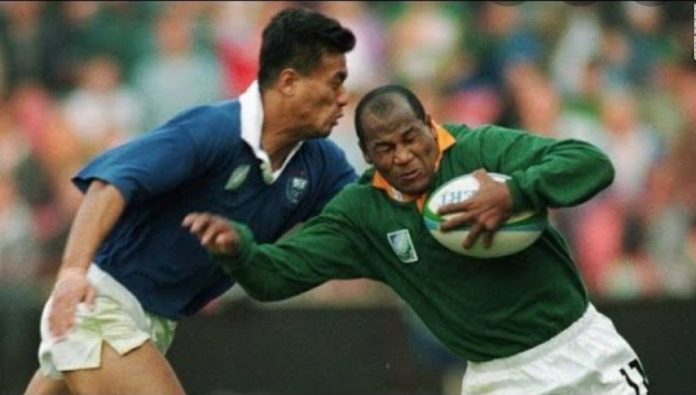 The World Cup-winning South Africa wing Chester Williams has died from a heart attack at the age of 49.

A hamstring injury forced Williams to pull out of the South African squad on the eve of the 1995 World Cup, but when Pieter Hendricks was suspended for a red card, the wing returned to the team, scoring four tries against Samoa in the quarter-final.

Williams went on to start the semi-final against France and tasted sweet victory in the final against New Zealand which South Africa won 15-12.

Limā observes that Chester Williams is the fourth member of that 1995 Springbok team to pass away.

“Ruben Kruger, Joost van der Westhuizen and James Small, he was the other wing, also died from a heart attack not too long ago,” says Limā who had played alongside all four.

As the sole black representative of that Springbok team, Williams quickly became one of the faces of the tournament alongside captain Francois Pienaar and South African president Nelson Mandela. He became the symbol of a multi-racial Springbok side.

Former Manu Samoa Daniel Leo who played from 2005-2015 pays tribute and posts that Chester Williams “was a player who inspired a generation,”.

After retiring in 2001 Williams coached the South Africa sevens team – the Blitzboks – and took in spells with the Uganda and Tunisia national teams. He had most recently been working for the University of the Western Cape as head rugby coach.

Mark Alexander, president of SA Rugby, revealed his shock after hearing Williams had died in Cape Town on Friday afternoon. “The news of Chester’s passing is devastating and hard to believe, as he was still young and seemingly in good health,” Alexander said on springboks.rugby.

“Chester was a true pioneer in South African rugby and his performances at the World Cup in 1995, as a snapshot of his Springbok career, will forever be etched in the hearts and minds of our rugby public. As a member of the Springbok class of 1995, Chester was not only well-known in the rugby fraternity, but he was a much-loved South African whose influence stretched wider than just the rugby world.

“He was passionate about rugby and South Africa and as coach, at various levels, selflessly gave back to the game after he hung up his boots. He played with courage and was a beacon of light in his community and in the broader South African context,” says the South African Rugby President.