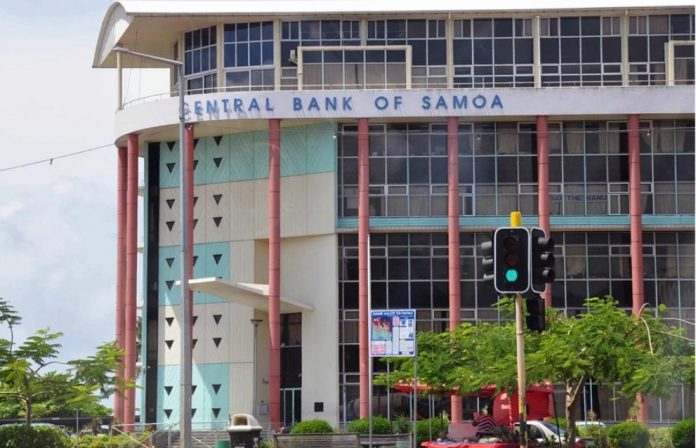 13 July 2019 Apia Samoa. Press Release. The Central Bank of Samoa Board of Directors at its meeting on the 28th of June 2019 approved the continuation of its loosening monetary policy stance for the financial year (FY) 2019/20.

In making its decision, the Board took into account the economic growth situation as inflation is expected an upward trend over the year.

According to the International Monetary Fund’s (IMF) April 2019 World Economic Outlook (WEO) update, the global economy is expected to grow at 3.45 percent in FY2018/2019, slowing down from 3.70 percent in FY2017/2018, driven by both growths in advanced economies and emerging markets and developing economies.

On the domestic front, real GDP is expected to grow at 3.9 percent in FY2018/19, up from -2.2 percent in FY2017/18, the source of this higher growth is from a sharp hike in ‘Commerce’ which accounted for gains in remittances and tourist earnings, as well as expected expansions from ‘Construction’, ‘Communication’, ‘Financial Services’, ‘Electricity and Water’, ‘Public administration’ and ‘Food and Manufacturing’ sectors. With further improvements in remittances, proceeds from tourism, exports and influx of government budget support funds, gross foreign reserves is expected to stand at $450.3 million which is sufficient to cover 6.2 months. Following post recovery from Cyclone Gita in February 2018, the headline inflation is trending downwards to 2.3 percent in June 2019, from 3.7 percent in June last year, highlighting the reduction in imported components.

With the manageable and elevated level of our international reserves, the Board felt that monetary policy should remain loose in order to support economic growth. Interest rates are currently at low levels in May 2019 with the weighted average lending rate at 8.97 percent while average deposit rate is at 2.52 percent. The aim is to maintain these low levels going forward to encourage lending to private businesses in order to foster domestic investment and economic activities.

The outlook for real GDP in FY 2019/20 is expected a strong growth of 4.9 percent to reflect positive impacts of Pacific Games in Samoa 2019, Pacific Arts Festival and several large meetings such as Asia Caribbean Pacific – European Union (ACP-EU) Agreement signing, Pacific Ocean Climate Conference, ACP Fisheries Ministers Meeting, Regional Transport Ministers Meeting and on-going government projects such as Apia Waterfront Development, Sea and Air Port developments, road widening, constructions of Vaisigano and Maliolio bridges and a five storey building at Savalalo. Headline inflation is forecasted to edge up to 2.6 percent by end June 2020, as both imported and local components are expected to remain elevated in the next twelve months. Foreign reserves are expected to expand by $17.8 million in FY2019/20 given expected highs in receipts remittances, tourism and exports of goods which will put official reserves around 6.1 months of import cover.

With an expected increase in economic activities in FY 2019/20, the Board felt that the monetary policy stance should remain loosened in order to support growth at a time when Government is pursuing its fiscal consolidation.