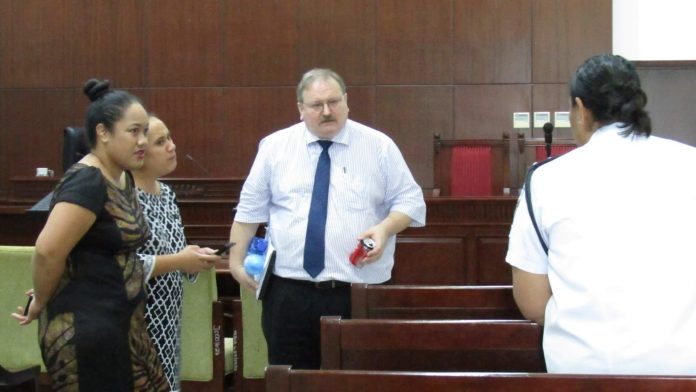 The hearing of Herman Paul Westerlund and Suapaina Savaiinaea jointly charged with manslaughter following an incident at the Lounge Bar in Apia in the early hours of 01st December 2018 continued to Saturday this week.

After a week-long hearing, witnesses presented by Prosecution as well as a video recording from a surveillance tape being viewed in public Coirt have established that Malaki had been punched, taken a hard fall, punched again while on the ground, and then kicked on the night of the incident at the Apia Marina’s Lounge Bar.

Sitting through on a Saturday, the Supreme Court of Samoa heard from the much awaited evidence of Pathologist Mr Paul Botterill, who had performed an autopsy on Malaki.

“In my opinion the cause of death was brunt force head injuries, in keeping with injuries sustained from being struck in the face, kicked in the head or falling on the floor..; it was not possible that the autopsy can specifically state which of these things resulted in the head injuries”

“It was not possible that the autopsy can specifically state which of these things resulted in the head injuries.”

Pathologist Mr Paul Botterill says that any one of those as described; a blow to the front of the face, a fall to the ground, blows while still on the ground or a kick that came after all that could have resulted in transimission force into the brain, causing brain injury.

“The force that does the damage to the brain, is transmitted through the skull to the brain itself, so what presents of the fracture is a mark of a severe head injury, its not a fracture of a damaged tissue your honorn it’s a transmission force also causing fracture to the brain tissue itself.”

Mr Paul Boterill said that of the three: punch, fall and kick, it was more likely that the punch or the kick caused the veins on the brain to rapture, causing the bleeding.”

Defense Counsel Mr Aaron Perkins QC, took three hours to cross examine Mr Boterill, highlighting to him that the radiologist had identified a fracture that his report had not mentioned.

“I’m not saying that the pathologist will always be correct, the fracture was there but I was not able to visualize it”.

“The autopsy is not able to see all the things the scan and x-rays could see.”

Defense Counsel for Suapaina Savaiinaea, Leiataualesa Jerry Brunt did not have any questions for the patholigist.

The hearing continues into its second week, as the prosecution calls over 30 witnesses to the stand.