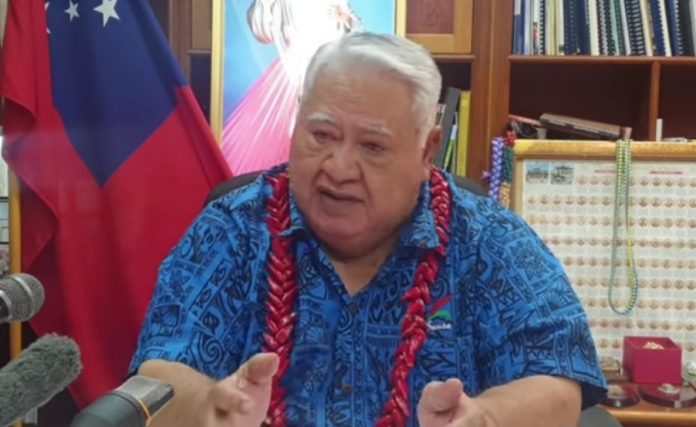 29 June 2021 Apia Samoa.  Caretaker Prime Minister Tuilaepa Dr Sailele Malielegaoi says the post election process is not yet complete, and all 51 electoral consituents of Samoa have to be represented at the first convening of Parliament after a general election.

Tuilaepa was speaking to Radio 2AP on Monday afternoon after the handing down of a Supreme Court decision that not only declared the swearing-in of 26 FAST members under a tent outside Parliament as unlawful, but also directed Parliament to sit within 7 days.

In response Hon Tuilaepa once again quotes Articles 111, 52 and 44 of the Constitution and says they are all important sections to consider for the convening of Parliament.

In the past, Samoa’s Parliament has convened and moved forward with its duties, not having to wait for election petitions before the Court. However the Caretaker Prime Minister says the process in the past has always been that all 51 Constituents are represented at the first sitting of Parliament.

“Remember we are the ones who understand these laws well because we are setting them, so we read them over and over again;

“After an election all MPs must be able to participate in the first sitting of Parliament, there can be no empty seat,” said Tuilaepa.

“That is because all Constituents of Samoa have an equal right to the different appointments made at the first sitting, such as Ministerial positions,” he added.

Tuilaepa concludes and insists the post election process is not yet complete, to ensure all elected members participate at the first meeting of Parliament.

The Supreme Court was direct in its orders as handed down by Justice Vui Clarence Nelson to a packed courtroom Monday afternoon, that the tent swearing-in was unconstitutional because the Head of State was not present and it was not in line with what is cultural. However acknowledging that the tent swearing-in was done because Parliament did not convene, the Supreme Court then affirms a Head of State proclamation dated 20th May 2021 for Parliament to convene, and further directs the Parliament of Samoa must convene within 7 days.

Tuilaepa did not say whether or not the caretaker government would adhere to Supreme Court orders and convene Parliament before next Monday. He did, however, revert back to his previous position, that the Parliament of Samoa can only be called to convene by the Head of State.

Tuilaepa says the most important part of the decision handed down by the Supreme Court on Monday afternoon was to declare the FAST swearing-in unconstitutional and unlawful.

“There has been a gross breach of the Constitution by this political party”, said Tuilaepa.

“They keep blaming me and my government for not following the Rule of Law but they have now been found breaching the Constitution, the highest law of the land,” said Tuilaepa.

“And they have told the world that I am in contempt of Court and my government are not following the Rule of Law, but they don’t look at themselves,” said Tuilaepa.

“I have been blamed for not acknowledging the Prime Minister Elect, but now the Court has clarified that there is and always has been one Prime Minister,” said Tuilaepa, “but the whole world saw the tent and the inappropriate way it was done”.

The Caretaker Prime Minister, the Attorney General, the Clerk of the Legislative Assembly and Speaker of the XVIth Parliament Toleafoa Faafisi, face contempt of Court charges for failing to convene Parliament as ordered by the Court on the 24th of May. The Supreme Court has now adjourned that matter to the 12th of July.

Justice Vui in handing down the Supreme Court’s decision Monday afternoon stated they are mindful that there may be ongoing efforts to obstruct the convening of Parliament; and directed the Attorney General to advise the Clerk of the Legislative Assembly and all relevant parties to convene the Parliament of Samoa within 7 days, or be held in contempt of Court.

Tuilaepa however says many Court decisions now have “tails” referring to additional orders of the Court; and says they will be looking carefully at the additional tail, and what should be done now.

The leader of HRPP says his party must remain strong in fighting for what is right because they had received the popular vote at the general elections.

“Remember 50% of the people voted for this political party while just over 30% voted for them; thats almost two times more,” said Tuilaepa.

“So we can’t back down (e le mafai ona matou faavaivai ai) because we are the ones with the popular vote”.

“The Court decision has presented Samoa with an opportunity to bring things back to the centre of the road (moa o le ala) and within the Rule of Law.. and we hope the caretaker government can see that and now move to follow what the Court has ordered”, said Fiame.

Fiame also reminds that the Court has stated they will revisit the doctrine of necessity in relation to the tent swearing-in, if Parliament does not convene in 7 days.