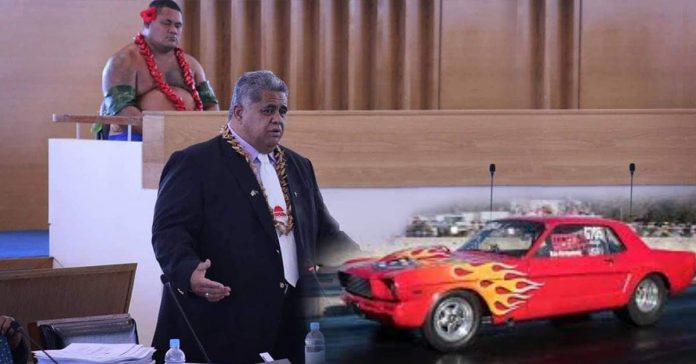 21 March 2019, Apia Samoa. Laaulialemalietoa Leuatea Polataivao spoke to defend the interests of car enthusiasts during the Parliamentary debate on the Road Traffic Amendment Bill 2019 that will criminalise car racing, stop the addition of parts to increase speed, and give the authority to either LTA or Police to impound offending vehicles.

The MP from Gagaifomauga No 3 suggested that it was time for Samoa to consider the growing interest in car racing as a global sport.

“Just like Game Fishing and Horse Racing, these are international sports accepted globally and Samoa should move with the times to organise car racing as a sport, given the popularity of events like car shows that we have seen in Samoa”.

Car shows held at the Tuanaimato sports grounds during Independence celebrations have attracted hundreds of people with a notable increase in the past few years.

Laauli said that his Constituency does support the amendments for public safety, but suggested that giving authorities the power to dismantle vehicles was going too far.

Laauli was referring to the MP for Anoamaa West Fonotoe Pierre Lauofo who had earlier suggested that racing cars be brought in and dismantled.

“Authority should be given to the Police or LTA to  not only impound, but dismantle these cars,” said Fonotoe.

Laauli disagreed saying that the only wrong is the use of public roads which could be avoided if there were a specific area allocated for the sport to be monitored and conducted in a controlled environment.