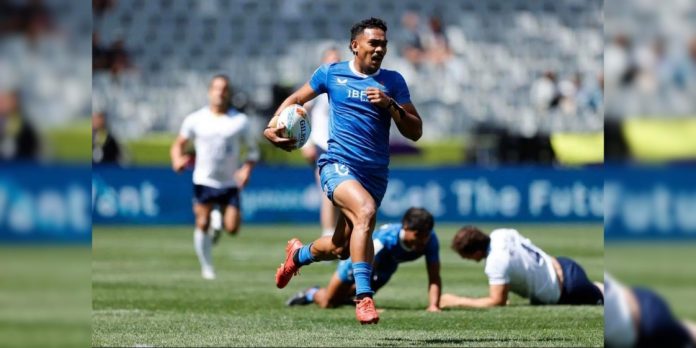 The Manu Samoa 7s have secured their second pool game 45-0 win over Japan in Capetown after defeating Uruguay 21-10 in their first match last night.

In their first Capetown pool match, NZ All Blacks went down to Spain. Australia lost to Great Britain and Ireland have lost to Uruguay. What this means is the quarterfinal spots are not yet fully secure until the final matches are played.

Uruguay gave the Samoans a scare in their first pool match. It took Samoa 5 minutes to score the first points of the match via Tuna Tuitama.

Since being called back into the Manu 7s squad, Tuitama has held his own on the wing, scoring a try in every game he’s started.

Shifty forward Uaina Sione extended Samoa’s lead to 14-0 in a blink of an eye.

While behind by 14 points to nil, the men from South America lifted their game and caught Samoa off guard.

Uruguay proceeded to score two tries on either side of half time, closing Samoa’s lead to 14-10 with 5 minutes remaining.

Samoa had not secured the match and Uruguay were starting to build momentum.

Samoa was placed under immense pressure before Va’afauese Apelu Maliko worked his magic with a trademark chip-kick that he gathered brilliantly to score under the sticks and cement Samoa’s 21-10 victory.

Tonight, on Day 2, Samoa were a different beast in their second pool match against Japan. Samoa erupted with 45 points and a strong defence that left Japan scoreless.

Apelu Maliko scored himself a double that places him first on the HSBC Top Try Scorers list for the 2022/2023 season with 15 tries in just 2.5 tournaments.

His partner in crime Uaina Sione once again showed off his underrated footwork to fool Japan into letting him score.

With Steve Rimoni Onosa’i out with a concussion, young gun Fa’afoi Falaniko stepped up to fill the shoes of Onosa’i – a challenge he actioned in spectacular fashion.

The Tepatasi product notched himself two conversions, several try assists and even took over kick-off duties for the side.

Taunu’u Niulevaea has been improving each tournament and will be a problem for opposing teams once he’s fully developed.

So here’s the equation:

If Samoa defeat Ireland they qualify for the cup quarterfinals as the top seed in Pool B.

If Ireland defeat Samoa, the Manu can still go through to the quarterfinals as second seed, UNLESS Ireland win by 46+ points.

The only way Samoa will miss out on a quarterfinal is if Ireland beats Samoa by 46 points, and Uruguay defeats Japan.

Samoa has not made a quarterfinal in South Africa since 2013.999