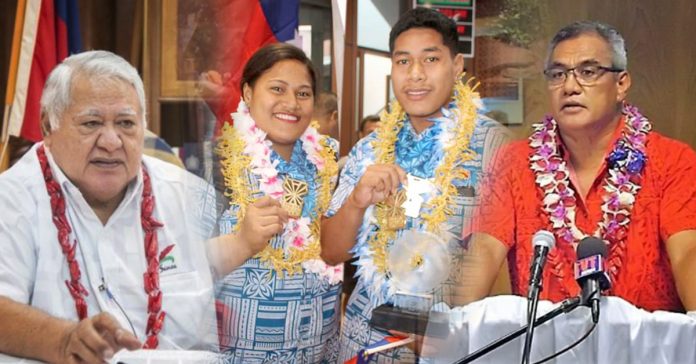 15 June 2019, Apia Samoa. Cabinet awaits a recommendation from the Minister of Education, Sports and Culture, Loau Solamalemalo Keneti Sio on whether Samoa’s two gold medalist winners from the Junior World Championships held in Fiji earlier this month would receive monetary rewards for their achievements.

Don Opeloge and Feagaiga Stowers wrote themselves into the history books by winning gold for Samoa at the IWF Junior World Weughtlifting Championships.

The Prime Minister was asked during his weekly media program if the gold medalist winners would be receiving monetary rewards from Government following the world championship event.

In response, Hon Tuilaepa Sailele Malielegaoi said a letter has been passed to the Minister of Sports for his advice to Cabinet on the matter.

Contacted for a comment the Minister of Sports says that he is considering the relevant Government policies and that the decision should be finalised next week.

Head Coach and President of the Samoa Weightlifting Federation told Samoa Global News that the Cabinet Directive in relation to winning world championship events clearly sets out the criteria and amounts to be rewarded.

According to the Cabinet Directive (FK Faaiuga Kapeneta) individuals who win a gold medal from a World Championship tournament will receive $20,000. The same FK also confirms $20,000 tala for securing a gold medal in the Commonwealth Games.

This is also where they reward the Commonwealth Games gold medalists,” said Tuaopepe.

Tuaopepe said that this is the first time in over 30 years Samoa has been able to bring home medals from this international event and securing gold is a great achievement for the young lifters.

He added that it was history in the making when Don Opeloge was able to get two gold medals in the clean and jerk division.

Samoa’s national weightlifting team will compete against more than 400 athletes from the Oceania and Commonwealth regions in the Olympic Qualifiers held in Samoa as a “4-in-1 Weightlifting Competition” that will run in conjunction with the Pacific Games next month.

Earlier this week the Gambling Control Authority presented $25,000 tala to the Samoa Weightlifting to assist with their preparation towards the Olympics Qualifiers.