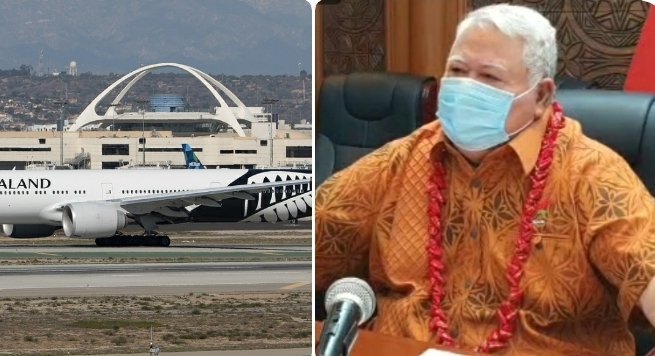 “I’m just letting you all know in advance,” said the Prime Minister, “that the final decision will be made by Cabinet tomorrow afternoon”.

“Then we will have another press conference to let you all know what the final decision is”.

The Prime Minister said, as in all decisions of Cabinet, that careful consideration will be looked into from all aspects, before a final decision is made.

Repatriation from the Northern Hemisphere is in high demand, with over 400 registered citizens requesting to come home while only 300 seats are available on the chartered Air New Zealand flight.

Citizens catching the flight from Los Angeles originally planned for this Friday 27th have already travelled from Europe and Hawaii in anticipation of coming home.

Samoa has three scheduled flights remaining, with the other two planned from Auckland.

When the first positive test for COVID-19 was announced last Thursday morning, the Prime Minister had said there were no plans to cancel the scheduled flights.

“There is no need to panic or disrupt the plans already underway for these flights,” Tuilaepa had said last week.

“The young man who tested positive is in isolation and we have every confidence in the systems and processes we have in place, that ensures this single case will be well contained”, assures the Prime Minister.

“Our students overseas will be stranded, and need to be brought home, as well as other citizens who have been planning and preparing to come home on those flights”.

A special wide body Air New Zealand Boeing with a seating capacity of just over 300 had been chartered to repatriate citizens from the Northern Hemisphere via the United States.

Samoa’s NEOC Interim Chair Agafili Shem Leo said in a press statement earlier this week that, “Heightened vigilance and compliance with entry requirements and plans for its management, as with all flights, will continue to be enforced”.

Another two flights are scheduled for 04 December and 11 December from New Zealand, to bring home citizens in time for Christmas including Samoan students and seasonal workers  who study and work in New Zealand and Australia throughout the year.

The Prime Minister concludes, “Let us pray for discernment in the hearts and minds of Cabinet, as to best decision to make regarding that flight”.