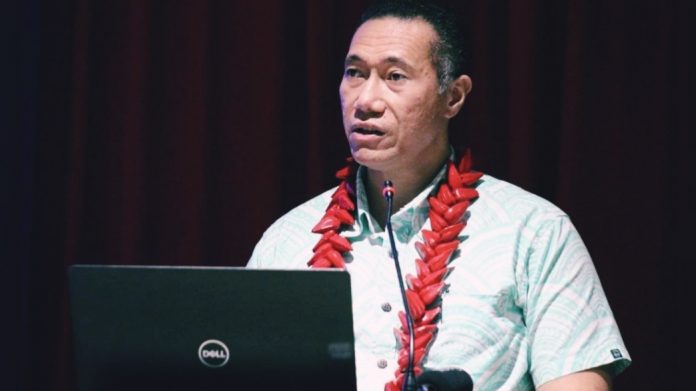 Cabinet has re-appointed afioga Agafili Tomaimano Shem Leo as the Chief Executive Officer of the Ministry of the Prime Minister and Cabinet (MPMC) and Secretary to Cabinet for a further three years.

Agafili Tomaimano has championed Samoa’s emergency response to the global pandemic and other natural disasters for the past two years, having been appointed the interim Chairman of the National Emergency Operation Center (NEOC) in 2020 when the MNRE CEO resigned to run in the general elections. As head of NEOC, Samoa has become accustomed to Agafili’s calming voice of reason, articulating emergency response procedures and giving advice during disasters. Agafili has featured regularly in press conferences, as the leader of Samoa’s emergency response teams and frontliners, for the past two years.

During national disasters and flooding, Agafili Tomaimano is seen out on the field with frontliners, announcing emergency evacuation sites and leading the dissemination of information to the people of Samoa.

Agafili also Chairs the National Security Committee that works closely with the NEOC and all other sectors in the area of security. Agafili was first appointed to the CEO of MPMC in 2015. The re-appointment would be his third term as the head of the Ministry of the Prime Minister and Cabinet.

Prime Minister Fiame Naomi Mataafa confirmed Agafili’s appointment during a press conference Thursday afternoon, along with three other CEOs including Saoleititi Maeva Betham-Vaai to the Ministry of Finance, Elita Tooala to the Ministry of Public Enterprises, Tevaga Viane Tagiilima as CEO of UTOS.

The Prime Minister conveyed her congratulations to the CEOs appointed to lead key areas of Government.

“Agafili Tomaimano Shem Leo has been appointed to continue as CEO for a further three years. We pray that all the CEOs appointed will continue to be blessed with wisdom and knowledge to carry out their duties to Samoa,” said the Prime Minister.