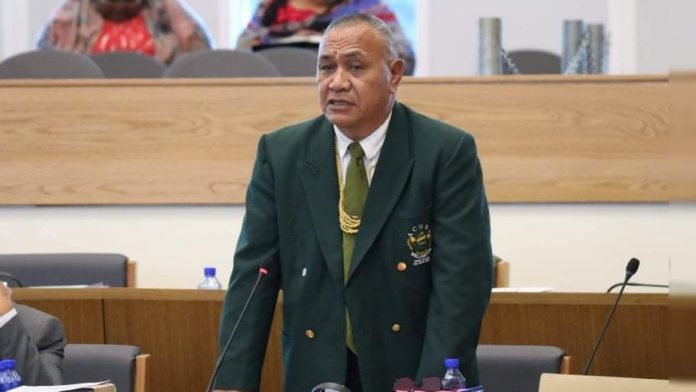 16 June 2022, Apia Samoa.  The Minister of Works, Transport and Infrastructure Hon Olo Levaopolo Fiti Vaai has confirmed that he will be filing a defamation law suit against the leader of the opposition, Tuilaepa Dr Sailele Malielegaoi.

Speaking on the Congregational Christian Church (EFKS) television network on Wednesday night, the Minister said he will not go back on this decision, as it is not the first time he and his family, as well as his constituency, have been affected by false allegations that defames him.

Olo is referring to last week’s press conference where the leader of the opposition had raised the issue of a V8 diesel landcruiser with private plates which had been assigned to the Minister for his use.

During that press conference, Tuileapa told media that the use of private license plates for a vehicle assigned to a Cabinet Minister was not according to proper protocol, and then compared the action to theft.

In response, Olo Fiti Vaai again explained the procurement process on EFKS TV and further clarified the purchase, which he reconfirmed was paid for with underutilised Waterfront project funds.

He said various State Owned Enterprises under his authority had been asked to source vehicles for himself and his two Associate Ministers.

According to Olo, when he took over as Minister, he found that the EPC had purchased an off-road car for the previous Minister of Works Papalii Niko Lee Hang. “When I came on board the CEO was using that car… so I needed to source vehicles for us.”

Olo said he then directed the Samoa Water Authority (SWA) and the Samoa Shipping Services (SSS) to purchase cars for the two Associate Ministers. In a previous interview with Radio Samoa, the two SOEs named by the Minister were SWA and SSC.

Olo said that as Minister of Works Transport and Infrastructure, he needed to conduct site visits to various projects around the two islands.

Olo said he has taken defaming hits in the past, which he had chosen to ignore despite his constituency telling him to sue. Olo referred to a previous incident where he was implicated in the importation of a container of whisky. He said he has successfully sued TV1 for defamation in the past, and this time, Tuilaepa has gone too far and he will not back down.

In relation to the private plates on government vehicles, Olo provided a list of cars fitted with private license plates, assigned to various government ministries.

The Minister of Works concluded by saying that as long as Tuilaepa remained suspended from Parliament, he would no longer be responding to him.

“If other MPs raise issues, then I can respond, but not Tuilaepa and Leala who are suspended from Parliament.”

The Human Rights Protection Party holds a weekly press conference every Thursday with local media, that is also posted as a live. Tuilaepa is expected to respond at this afternoon’s session.