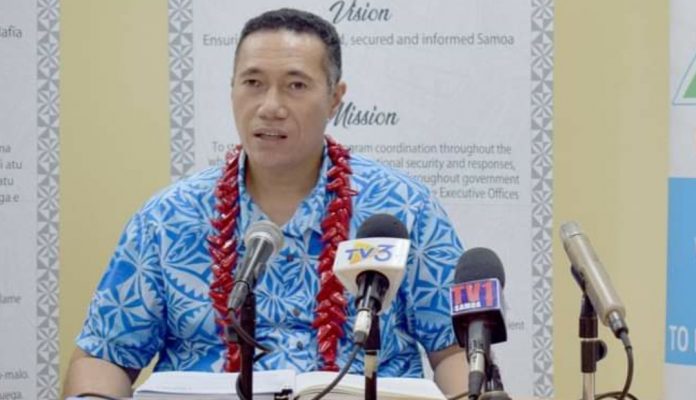 Cabinet has appointed the Chief Executive Officer of the Minstry of the Prime Minister and Cabinet (MPMC) and Secretary to Cabinet, Afioga Agafili Tomaimano Shem Leo as the Interim Chairman of the National Emergency Operation Center (NEOC).

The Chair of the NEOC is a role that is automatically taken up by the CEO of the Ministry of Natural Resources and Environment (MNRE). This was held by Ulu Bismarck Crawley who has recently resigned to stand for Parliament in the upcoming general elections.

The NEOC leads the coordination of Samoa’s national preparedness to disasters and as head of the NEOC, Agafili will take over the leadership of Samoa’s response to covid-19 until a new CEO has been appointed for MNRE.

NEOC was also at the forefront of the coordination of Samoa’s national efforts and emergency response to the measles outbreak.

The NEOC operates apropos requirements of the relevant laws and the National Disaster Management Plan.

Agafili Shem Leo is also the Chair of the National Security Committee that works closely with the NEOC and all other sectors in the area of security.