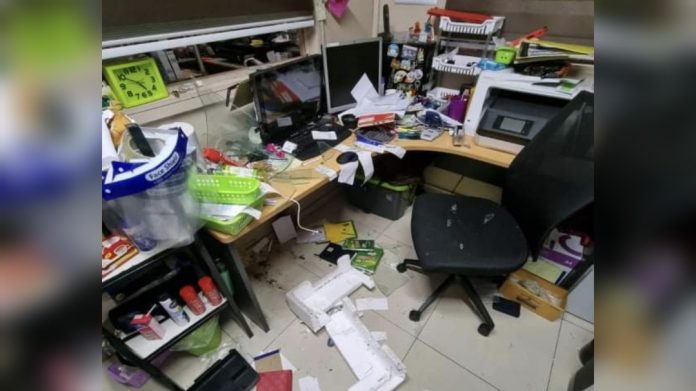 27 March 2022, Apia Samoa.  A businesswoman has expressed deep disappointment in the acts of burglars who hit her supermarket on Saturday night, taking beer, cigarettes and about $400 of loose cash and coins found in her office after they thoroughly trashed it.

Afamasaga Vernier Punivalu said the burglary of her Tuanaimato supermarket had only been discovered on Sunday morning when her daughter had gone to turn off the lights and pick up a few things for their breakfast. She says children who run the family business are disheartened to find the destruction left behind by the culprits.

“To see all your hard work destroyed and robbed is an awful feeling,” shares Afamasaga.

“They broke through the back, and must have had proper tools to cut the security mesh and then break through the glass window.” Afamasaga suspects the burglars attacked during the period of heavy rains on Saturday night.

“The dogs would have been taking cover during that time and they didn’t take any electronics..”

Afamasaga says they dragged a safe to the back of the shop, but were unable to carry it out with them. She said police were called and arrived almost immediately.

The Mariyon supermarket and bakery is less than a kilometre from the Faleata Police Outpost. Deputy Police Commissioner Auapaau Logoitino Filipo said their Faleata team are investigating the incident, and have increased patrols around the Faleata-Tuanaimato area.

Auapaau adds that of the 58 charges issued by SPPCS since lockdown on the 18th of March, very few have been for burglary and break-ins.

“We have seen a decrease in home invasions and burglaries since the lockdown and I believe that is because people are at home now 24/7. I do think they are specifically targeting stores where the owners live separately from the location of their business,” said the Deputy Police Commissioner.

“Our team at Tuanaimato are investigating and will also increase surveillance and patrols during the bad weather,” he added.