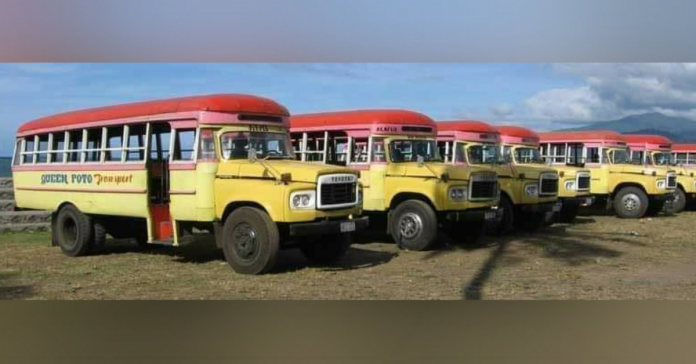 02 April 2020 Apia Samoa. The bus industry is one of many sectors of the business community in Samoa who are feeling the impacts of the deadly COVID-19 pandemic during the state of emergency period and one bus owner has tried to cushion the blow of job losses to drivers who have been put out of work.

Although the 14 day state of emergency for Samoa was originally called to end this Saturday 4th April, it is highly likely that government will be extending the lockdown.

Aiono Afaese Leaupepe Toleafoa Faafisi of Queen Poto Transport says they fully support the orders to avoid close contact between people at this crucial time, and agrees that the safety and well being of Samoa should be our first priority.

He shares that the biggest burden to him as a business owner at this time, is the ability to maintain employment for his bus drivers who rely on wages to feed and support their families.

The Queen Poto company have taken it upon themselves to cushion the impact on job losses by offering bus drivers opportunities to work in other areas of the business. As a company, Queen Poto also operate a petrol station, convenience store, car rentals, agricultural ventures and other services.

“We have tried to place our bus drivers into other types of work for the time being, so they can continue to have a job and still earn a wage to support their families.”

“But there have also been other bus drivers who have opted to use this time to develop plantations of their own, until we are able to resume work”.

Aiono confirmed that the inability to operate buses equates to a direct loss of at least $4,000 tala per day, or close to $60,000 tala over the 2-week state of emergency period.

Queen Poto is one of several private bus operators currently servicing Samoa’s public transport system with 20 buses covering routes all across Upolu. Aiono says the daily income from each bus is $200 tala minimum.

“So if you work that out for the two weeks, that is the total loss of income”, he explained.

Despite the impacts and inherent losses Aiono remains encouraged that Samoa’s resilience in times of difficulty will prevail and adds that it is important to supoort government efforts at this time.

“We try our best to find the money and juggle things around to maintain business survival, so we can continue to provide jobs for our people”.

The coronavirus COVID-19 is affecting 203 countries and territories around the world and 2 international conveyances: the Diamond Princess cruise ship harbored in Yokohama, Japan, and the Holland America’s MS Zaandam cruise ship.