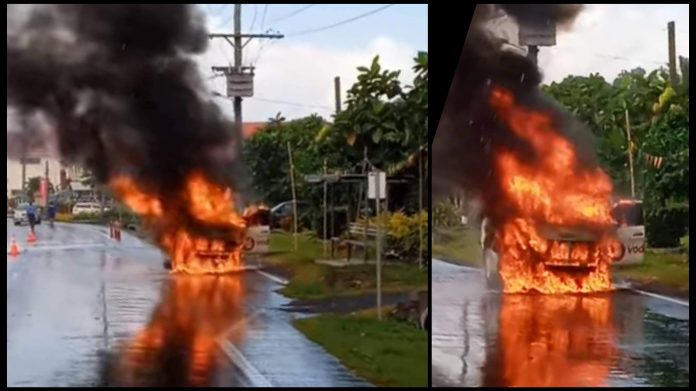 LMonday 11 June 2022, Apia Samoa. A Vodafone Samoa vehicle was seen in flames on the roadside across the road from the Afega police outpost just after 12pm this afternoon.

An eye witness who was travelling into town on a Tepatasi Samatau bus filmed the entire incident on Facebook live showing the burning vehicle completely engulfed in flames.

Fao Tausunu said the vehicle had just caught fire as their bus approached. Vehicles travelling from both sides of the road were being stopped by police, and told it was not safe to pass.

“A police officer told our bus driver that the car had broken down with engine problems, and caught fire,” said Tausunu.

Traffic remained at a standstill until the team from FESA – Fire and Emergency Services Authority –  arrived.

“When FESA got to us they quickly put the fire under control.. we all saw how fast and professional they were..”

FESA have confirmed that no-one was killed or hurt during the incident.