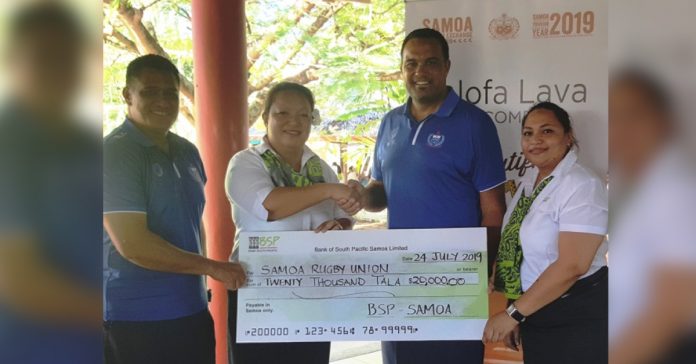 Bank South Pacific [BSP] has rallied behind the Manu Samoa’s Rugby World Cup campaign in Japan later this year, by donating SAT$20,000 to a Radio-thon fundraiser held on Wednesday 24th July. BSP Samoa’s Country Head Taitu’uga Maryann Lameko-Vaai attended the presentation at the STA Fale along with some of the members of the Manu Samoa management and team.

“This is not the first time that BSP has provided financial support to the Manu Samoa team and the Samoa Rugby Union” says Taitu’uga. “The Manu Samoa brand remains strong and the team continues to be great ambassadors for our country. They need our support.”

This sponsorship reinforces BSP’s commitment not only as the market leader in the South Pacific’s banking and financial sector, but as a committed partner in helping the communities we operate in prosper.

“BSP wishes the team the best of luck in their Pacific Nations Cup match against Tonga’s Ikale Tahi this coming Saturday,” Taitu’uga added.