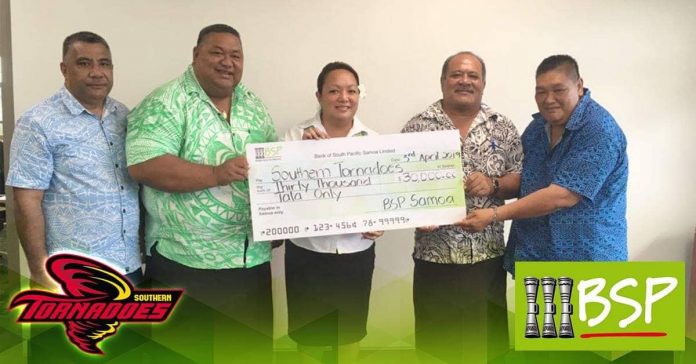 Bank South Pacific (BSP) has reaffirmed their support as the Naming Sponsors for the Southern Tornadoes rugby franchise, with a sponsorship deal valued at $30,000; of cash and in-kind donations.

Bank South Pacific’s commitment to growing better futures for the people of Samoa and the Pacific has been reinforced further with the decision to continue their support for the Southern Tornadoes Rugby Team. The franchise represents the districts of Falealili and Siumu and this is the second time they have participated in the Super 9 Rugby Tournament. This investment demonstrates BSP’s dedication towards the development of youth effective participation in highly competitive national rugby tournament and paves the way for sport as an alternative career path for the unemployed youth.

Furthermore this partnership strengthens BSP’s allegiance not only as the market leader in the South Pacific and Samoa’s banking and financial sector, but as a committed partner in the community, with a focus on cultural and sporting activities.

“BSP is pleased to continue this partnership with the Southern Tornadoes to secure their participation in the Super 9 tournament, especially since the tournament will lift the level of local grassroots rugby in Samoa. But most importantly we are giving a little back to the community by supporting Samoa’s youth to develop their career in rugby,” said Taitu’uga Maryann Lameko-Vaai, Country Head, Bank South Pacific Samoa.

The President of the Southern Tornadoes, Afioga Faalogo Iosefo Sopi expressed his gratitude for BSP’s support to the development of their youth.

“BSP wishes the Southern Tornadoes the best of luck for the tournament and we look forward to a national rugby tournament we can all enjoy over the next 9 weeks”, Taituuga added.

The Southern Tornadoes will kick-off their Super 9 campaign on Saturday 6th April at Don Bosco Rugby Field in Salelologa Savaii.