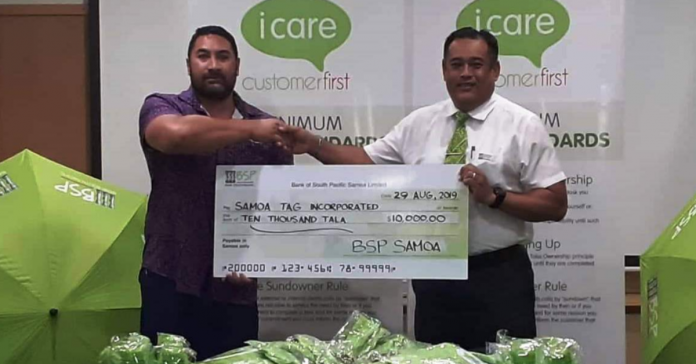 30 August 2019, Apia Samoa. Bank South Pacific (BSP) Samoa have announced their commitment to the development of Samoa Tag with a sponsorship of ST$10,000 tala of cash and in-kind contributions towards the inaugural International Tag World Club Tournament.

The upcoming tournament will be hosted by the Samoa TAG Incorporated team during the Teuila festival week in Samoa.

BSP’s Head of Business Banking Mr. Edward Yee says the assistance to the development of Tag as a sport in Samoa reinforces BSP’s  commitment not only as the market leader in the South Pacific’s banking and financial sector, but as a partner in the community through cultural and sporting activities.

“This is one of the many BSP commitments to the Community when we acquired Westpac Bank
Samoa in July 2015 – and that is to grow together with the Samoan community,” said Mr Yee.

“We are pleased to announce our partnership with Samoa Tag Incorporated;

“BSP is deluged to become a Silver sponsor for the Teuila Tag World Club Tournament. We are particularly happy to be part of this initiative because it promotes, develops and utilises the talents of our youth,” says BSP’s Head of Business Banking.

Through the efforts of Samoa TAG Inc the sport has grown in Samoa in recent years amongst different age groups with programmes being held within schools and villages across Upolu and Savaii.

“TAG is a new sport in Samoa and yet, we have seen the rapid growth within a short span of time,” said Mr Yee.

“But most importantly for BSP, we are giving a little back to the community. By supporting this event we are able to help with the development of Tag as a career pathway for our youth,” added BSP Samoa’s Head of Business Banking.

The President of Samoa TAG Incorporated Faaofonuu JP Leota expressed his appreciation to BSP Samoa and confirms that participants will include players from villages in Savaii as well as teams from overseas.