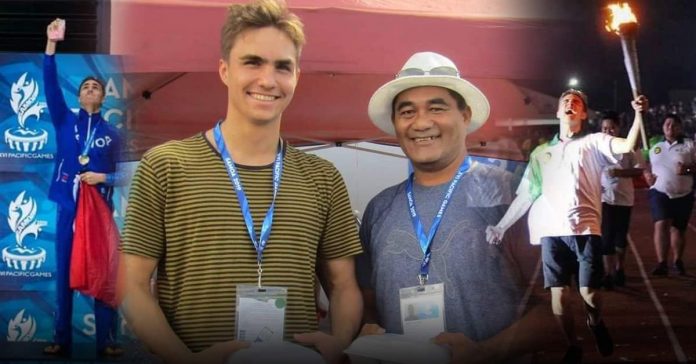 Toeolesulusulu Cedric Schuster was one proud father as he stepped forward to receive the award for best male athlete of the games on behalf of his son.

“And the best male athlete of the XVI Pacific Games goes to…..Brandon Schuster of Samoa!” 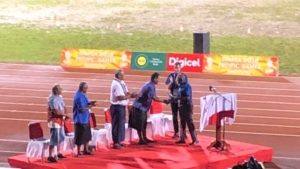 The Pacific Games Council Chair in announcing the award said it was for Brandon’s double gold medal achievement in swimming, but also for breaking barriers and setting new standards for Pacific swimming.

Asked what it was like to have Mom as Coach Brandon says he wouldn’t have it any other way.

“She taught me how to swim before I could walk,”

Brandon made history when he became the first Samoan to win a Pacific Games gold medal for swimming. He clocked 2:08.48 in the 200m backstroke, smashing the Pacific Games and Oceania records.

The Pacific Games closing ceremony was another spectacular event with performances of over 3,000 students, topped off by the brilliant Siva Afi team performing the traditional fire dance of Samoa and a world class display of fireworks.

The Pacific Games flag was lowered and handed to Solomon Islands as next hosts.