25 August 2019, Tutuila, American Samoa. Family members of two boys swept out to sea seven days ago remain strong in their faith despite the official search being called off.

Alex Peric and Anthony Leota were attending a church picnic at the Utumea West side beach last Saturday (Sunday in Upolu) when they were swept out to sea by strong currents during high tide at about 4pm.

Taofegauiai Peric is a mother of six boys and two girls; Alex is the youngest boy and second youngest of her children.

The official 72 hour search window by the American Samoa authorities ended nightfall on Tues 20th August but Mrs Peric asks the public who have offered messages of love and support to stay strong with her as she remains steadfast in the Lord.

“Any further attempts to search for the boys is entirely based upon volunteering,”

“But my family and l haven’t given up hope. We still remain steadfast in our faith in the Lord,”

“Where man is limited God is not,” says Alex Peric’s Mom.

“I ask that you be strong with me as we continue to pray, hope & believe that our God will reveal His perfect answer in His perfect timing”.

“I am not giving up,” says Mrs Peric.

“I am still praying, still hoping, still believing, still keeping the faith because God is in control❤❤”

“Join us as we wait upon the Lord. God bless you all,” adds Mrs Peric.

What has been revealed in the past week through messages of shared memories on social media, is a young man matured in his faith in God and his relationship with Jesus Christ.

Alex Peric, 18, has recently graduated from Tafuna High school, captain of the High School football team and his FB timeline has been inundated with messages, videos and songs of dedication.

A member of the football coaching staff Monica Taumulioalii Afalava captured this team prayer in October 2018 and this week she posts:

“I took and posted this photo on October 13, 2018. Below is my original caption:

“Since I joined the Football Coaching Staff at Tafuna High School 2 months ago, I’ve had an interesting time observing these athletes – their different behaviors and personalities. And today, I noticed something worth commending.

During the game, I saw this young man kneel down and pray over his teammate’s injury after he was helped off the field. I watched him praise God through his game performance. I witnessed him hug and say “Hey bro, God bless you. I love you.” to every single one of his teammates on the sidelines. I may coach Alex for power and performance, but it’s his faith that will move mountains. Alex, thank you for not being ashamed to share your love for God with your brothers. Thank you for showing the heart and soul of a true ‘Toa’.

A young team mate takes a screen shot of a conversation showing Alex witnessing to him and encouraging him to pray to God. 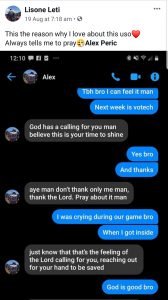 It is bleieved that Alex’s younger cousin Anthony Leota drifted out first and called out for help. Anthony is the second youngest of 10 children who have been raised by their aunty and uncle since their Mom was taken by the 2009 Tsunami.

Older sister of Anthony Leota, Matasaua Leota-Pefu says the two boys grew up inseparable and are cousins through their moms.

“Our moms Taofegauiai Leota-Peric, Billie Gerry Leota, and Filigataula Leota-Pefu are sisters on our Leota side from Pago Pago. Our birth mother Billie Gerry Leota passed during the Tsunami of 2009 when Alex was still very young. Her younger sister Filigataula Leota-Pefu and late husband Anisi Pefu took us in, and raised us as their own over the years”, she explains.

“I cannot discuss the type of person my little brother is without talking about my little cousin Alex because they were always a duo. They grew up together. We call them “Alex and Anthony” the Ying and Yang brothers because of how inseparable they are.”

Anthony Leota’s sister says her brother aspired to follow his older cousins to join the Military.

“His aspiration in life was to follow in the footsteps of his first cousins Yanko, Enrrique, Jerod, Venci and brother Faafetai to joini the military in hopes of a better future,”

“It is still surreal to us what happened yet, our faith grows stronger each day. We will continue to hold on to our faith and in return, a word of thanks to each and everyone who has shown their love and support for our brothers everyday,” says Ms Leota-Pefu.

“Continue to keep the faith and never give up hope,” she adds.