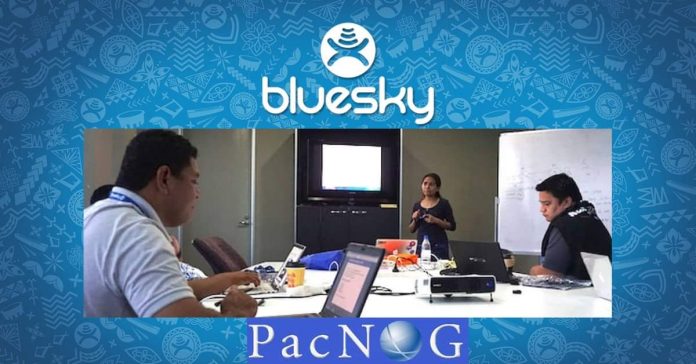 24 June 2019, Apia Samoa.  Bluesky Samoa is hosting over 60 international delegates attending the 24th Pacific Network Operators Group conference – PacNOG24 at their Maluafou head office in Apia.
PacNOG is open to all Internet Service Providers and Internet related organisations in the Pacific Island region and they are here in Samoa this week to once again discuss ways to improve Pacific ISP operations through a series of workshops.
The not-for-profit organisation is run by a small group of coordinators who look after the mailing list and organise bi-annual meetings in July & November that addresses key areas of development in the IT industry.
PacNOG was established initially as a mailing list for ISP operations engineers in the Pacific region who participated in the ISP Routing Workshop held prior to the APNIC 18  conference in Nadi, Fiji in August 2004.  (Asia Pacific Network Information Centre, pronounced A-P-NIC)
APNIC  is an open, member-based, not-for-profit organization, whose primary role is to distribute and manage Internet number resources (IP addresses and AS numbers) in the Asia Pacific region’s 56 economies.

PacNOG is made possible with the ongoing support of many organisations with common interests in the development and stability of the Internet network infrastructure, operations, services and performance.

The members of the PacNOG Coordination Team are currently:

PITA works closely with the other members of the PacNOG Coordinating Team to bring the 6-monthly PacNOG event to the whole region.

“We are always interested in expressions of interest of support from other organisations who share our desire to improve the Internet in the Pacific;

“Organisations who wish to support this or future PacNOG meetings should please contact the PITA Manager.”