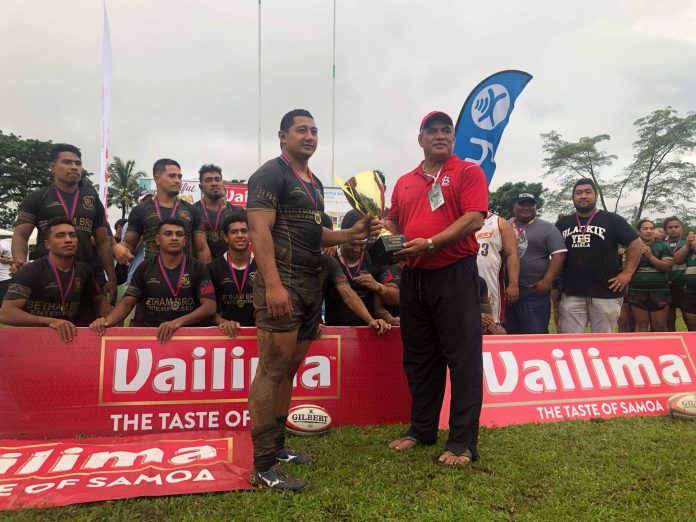 Vaiala have taken out the 32nd Marist International Sevens tournament defeating the mighty Apia Maroons 12-5 to win the Tupua Fred Wetzell Championship Cup that comes with a $20,000 tala cash prize.

Coached by George Mariner, Blackie were favourites to beat Maroon after a difficult run to the finals. They faced the well-oiled machine of Tamauli from Salelologa in the quarter finals, and the elusive tournament favorites Fiji, in an entertaining semi final that left Blackie Yes fans on the edge of their seats.

Vaiala deserved the win after the tournament draw saw teams from the same pool meet up again in the semi-finals. Vaiala was in the ‘Pool of Death’ when the live draw pick-of-the-hat put them with Fiji, Moataa and Vaimoso – only to meet the Fijians again in the semi finals.

Looking to secure their first ever Marist 7s title, Apia Maroons gave Blackie a scare by taking an early lead and dominating possession in the first seven minutes.

Maroon’s discipline on defence paid off when Silao Nonu forced a Blackie error that led to an early breakaway try for Apia.

Down by 5 at half time, Vaiala needed to dig for some of the excellence they had been showing throughout the two days of the tournament. Sure enough they did just that.

David Tavita scored under the post to give Blackie a 7-5 lead with only 2 minutes left on the clock.

Marist 7s finals are always exciting and entertaining and the 2020 32nd match was no exception.

Blackie’s star playmaker Patrick ‘Pato’ Faapale spent 2 minutes in the sin bin for a late tackle taking with him the hopes of Vaiala fans.

Players from both teams took to the second half with lifted urgency. Without any regard to the muddy conditions, both teams desperately defended their barracks to the end. Water boys having to bring water in, not for thirst but to get mud out of players’ eyes.

It was still anyone’s game to take with only 30 seconds left on the clock. Then Apia’s Samu Iosua committed a late tackle causing a penalty that gave Blackie the chance to seal the deal.

Former Manu Samoa Sevens representative Malu Falaniko indivudually stepped 3 would-be Apia defenders to score in the corner and secure his team’s championship, as well as the player of the tournament for 2020.

This is Vaiala’s second Marist 7s title, they won nine years ago in 2011. This win brings the Marist 7s Championship back to Samoa after 4 years of it being taken by an overseas side.

Auckland Marist who won three consecutive titles from 2016-2018 did not return this year. Tabadamu Fiji who won convincingly last year also did not return as defending champions.

In 32 years the Cup has been taken to Fiji twice and New Zealand four times. Vailele has won three titles but the tournament has been dominated by hosts Marist St Joseph’s 13 and Moataa securing 8.