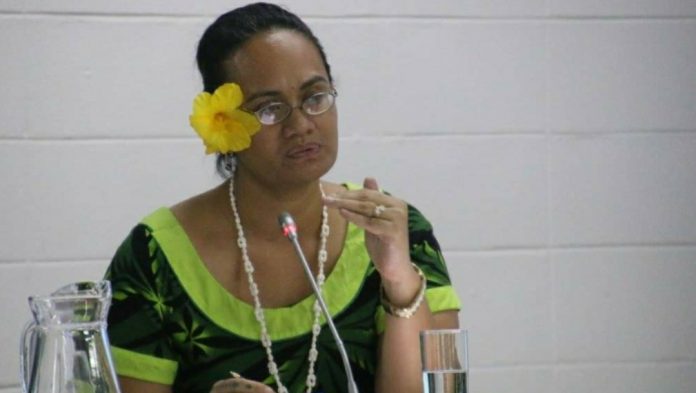 14 October 2020, World Rugby The World Rugby Women’s Executive Leadership Scholarship recipient, who serves on the Samoa Rugby Union board, believes attitudes are beginning to change for the better.

Fuimapoao Beth Onesemo has a proven track record of promoting gender equity, having served as CEO of the Ministry of Women in Samoa until stepping away from public office in 2018.

Rugby has also played a pivotal role in Onesemo’s adult life. A lawyer by profession, she met her husband, Samoa U20 head coach Setu Tuilaepa, in the early 1990s when he was a Samoa 7s representative, and has since worn a number of different hats in the Pacific Island’s community game.

According to the 45-year-old, she has served a myriad informal roles – from water carrier to team manager – until she was “shoulder-tapped” for a role on the Samoa Rugby Union (SRU) board two years ago.

Given Onesemo’s CV it seemed a natural move as World Rugby assisted the SRU in governance reform. However, her election to the board did not come without obstacles.

“It is still a rarity to have women involved in decision-making especially in traditionally male-dominated sports like rugby.

“The governance reforms of World Rugby, championed for SRU by the Chair and CEO have been great in catalysing formal changes through mandating a minimum of three women on the board in the constitution. We have two women at the moment out of eight board members, plus the president, so there’s still work to do on increasing diversity.

“As experienced in other areas and countries, attitudes and mindsets towards women do not change overnight and it has been very challenging to be on the board of SRU.

“The old boys’ networks, the meetings outside the meeting, still exist and there are still attitudes of ‘you are not qualified to talk about rugby matters because you’ve never played rugby, you’re a woman, you’re new, etc’. But, really the issues are about good processes and decision-making.”

“I needed to speak up”

Those are the attitudes that she is hoping to change through her participation in the World Rugby Women’s Executive Leadership Scholarship.

Onesemo was confirmed as one of 12 recipients for 2020 in March, and the 45-year-old hopes to use the opportunity to help promote gender equality within the game in Samoa while enhancing the systems and structures in place at the SRU with a view to improving results on the pitch.

“There are some positives,” Onesemo added, “in some areas there is recognition of the skill sets that different people bring to the table. Especially in terms of governance and using rugby as a vehicle to develop good people, nurturing the talent of our youth with the right values.”

Onesemo has consciously adopted an assertive approach in board meetings, to ensure that her ideas are listened to.

“If I was going to be heard on that panel I just needed to push through and speak up,” she added.

“In Samoa we have a culture where if there’s a discussion the oldest person usually is given the respect to speak first.

“So, for me, my strategy going into any meeting of the board was to try to be the first speaker and look to frame the issues properly so that the discussion is about the issues rather than being ad-hoc, going off in tangents everywhere.

“And so, if all of us are to benefit from the contribution of women in traditionally male-dominated spaces, women have to not worry too much about others’ views because not everyone would be welcoming.”

Onesemo admits that the approach has resulted in an increased workload for the union.

“But I think ultimately if we want to make a contribution to this space then there is going to be the need to do that,” she explained.

“If you’re going to talk then you might as well walk the talk as well.”

And Onesemo believes the fact she sits on the board alongside Tuiloma Sina Retzlaff proves that attitudes towards women in rugby in Samoa are beginning to change.

“Women have never been involved before in rugby to the extent that they are now,” she explained.

“We have a lot of young women coming through as match officials, some women are getting into coaching.

“This is the first time that there’s been two women on the SRU board, and the participation in playing, we have a number of competitions, from the primary school right up to club level and this year there’s a call to introduce into our highest level of domestic competition women’s teams.

“And so it is growing, but I think what’s needed is to draw that together into a coherent [strategy] of how we increase and accelerate that progress, making our game more diverse and inclusive [for] women, people with disabilities, people of diverse sexual orientation and identity.

“We need to do this through a gender transformative approach, tackling not just the symptoms but also the underlying unequal power relations which perpetuate the inequities.”

Towards that aim, rugby is being promoted to young women and girls in Samoa through Get Into Rugby (GIR) and GIR Plus, programmes that form part of World Rugby’s strategy to grow the game globally.

It should come as little surprise that having helped her husband forge his career in rugby and watched six of the couple’s seven children play, Onesemo is an advocate for the game’s ability to instil values and bring people together.

“My, I suppose, philosophy about rugby,” she said, “is it’s really a vehicle for developing good people in a holistic sense of the word; physical, spiritual, mental, social, relationships with others and that kind of thing.

“And so I’m a big fan of the GIR and GIR Plus programme that’s coming through under World Rugby, using rugby as a vehicle through which you introduce those values around respect, commitment, integrity and all of that into our young children, and mapping it up towards our older groups.

“And so, my involvement in rugby at the moment is basically that’s where I want to drive it to.”

Onesemo’s ultimate hope for the women’s game in Samoa is that the country’s society gets to a place where opinions on sporting talent and ability are not determined by sex.

“[It should be] more to do with heart and brains and hard work,” she explained.

“I recognise that that’s way down the path but my job as I see it is to help our board, help our union to start mapping out the systems, the pathways so that we can accelerate progress towards that.

“We’ve been struggling for quite a while now, and how many of our children, young men and women are missing out on the opportunities simply because us, the adults, have not been as effective as we could have been?

“And so, that’s where I am keen to contribute, ensuring good systems are in place, we can sustainably finance them, and there’s good people to deliver those outcomes.”