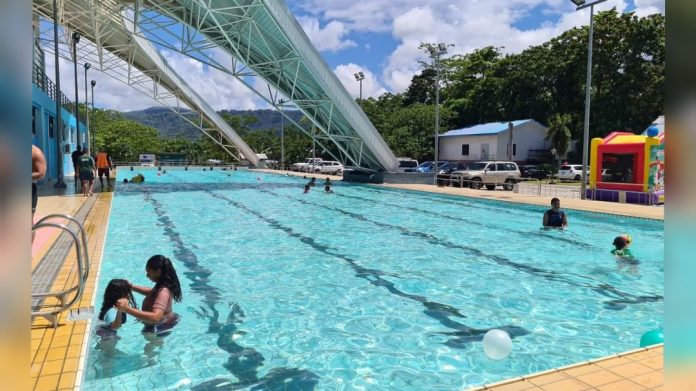 “The initiative in turning the Tuanaimato Cocoa plantation into sports fields was one of the best decisions made for our youth’s development by the HRPP government.”

Opposition leader Hon Tuilaepa Sailele Malielegaoi states this in his weekly Letter to the Editor following Samoa’s recent success across a number of sports including professional boxing fight wins for Ato Leau Plodzicki-Faoagali and Marion Ah Tong at Tuanaimato’s Gym2 on Friday night.

Tuilaepa reflects back to the establishment of what is now the Tuanaimato Sports Complex, when government decided to turn 400 acres of what used to be cocoa plantations at Tuanaimato, into sports-fields following back to back cyclones in the early 1990s.

“Thirty years ago, Cyclone Ofa and Cyclone Val in 1990 and 1991, completely wiped out our Copra and Cocoa exports that our economy depended on for over 100 years..

“We exported our Copra to markets in the UK and our Cocoa to Hamburg, Germany..

“Samoa was one of the 14 Countries in the world that produced the most-high flavored cocoa needed for the chocolate industry in Europe..

Tuilaepa says when the plants in the Tuanaimato area were destroyed by the cyclones, the decision to transform the acreage into sports facilities for various sports, “was the most sensible thing to do by our Government under the circumstances.”

“The original expectation of Cabinet was to carve up the 400 acres at Tuanaimato into quarter acre sections for settlements,” he writes.

“However, the alternative use, which I proposed as Minister in charge of the Samoa Lands Corporation, was accepted immediately by our Cabinet.”

The acerage were Samoa Trust Estates Corporation Lands (STEC), which were later placed under the Samoa Land Corporation (SLC) to administer.

“The execution was not smooth as neighboring villages moved in to occupy Tuanaimato for months and the use of Police to evict the squatters became unavoidable”, Tuilaepa recalls.

After the stand-off with village matai was eventually resolved, the construction work began, to level the lands and build what is known to all as the Tuanaimato Sports Facilities today.

Tuilaepa says not all of our children are academically orientated and calls for the construction of sports fields in the rural areas to continue.

“In sports as in music, there is no discrimination and no enemies, whether the sports field is located in a district under the HRPP MP, the benefit accrues equally to all the sons and daughters of Samoa.”

The former Prime Minister, currently chasing a two-year suspension from Parliament, observes that sports has the ability to bring a nation together, and remove barriers that may still exist from Samoa’s recent political crisis.

“The culture of hate and vindictiveness propagated these days has no place in our traditional religious and peaceful society..

“Simple common sense tells us that such attitude can only drive the Nation backward not just in sports, but in everything that makes us a proud Nation”.

Tuilaepa then suggests performance based incentives for teams competing at the global stage.

“We should also announce in advance of major International competitions incentives for our competitors, as a boost for their morale to win championships..”

“It was at Tuanaimato that the historical Small Island Developing States Conference of the United Nations was hosted in 2014 and the UN Secretary General HE Ban Ki-Moon presided as Chairman..

“The Conference outcome statement – The SIDs Accelerated Modality of Action Pathway – (SAMOA Pathway in short) became the blue-print for the UN 17 Sustainable Development Goals to guide the World’s Economic and Social Development, adopted in 2015..

“It became sweet music since, to hear repeatedly the words “SAMOA Pathway” uttered a thousand times on the floor of the UN and in other International conferences elsewhere when debating the latest status of the Pathway and the related 17 Sustainable Development Goals of the United Nations..”