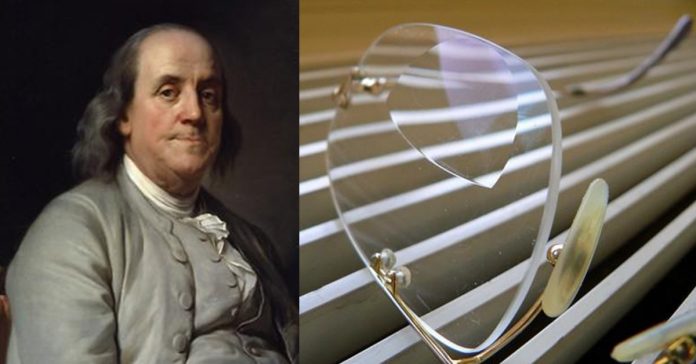 On May 23rd, 1785 Benjamin Franklin announced his invention of the bifocal eyeglass—forever enabling librarians and old folks to see both close-up and far away (while remaining stylish and chic). Franklin came up with the idea because he was “getting old” and had trouble seeing both up-close and at a distance. He was tired of having to switch between different pairs of glasses, so he devised a way to fit both types of lenses into one frame. He placed the distance lenses at the top of the frame and the up-close lenses at the bottom.

The term “bifocals” actually was not coined by Franklin and did not come about until 1824 when John Isaac Hawkins invented trifocal lenses—wow, that is a lot of glass. Franklin referred to his invention as the “double spectacle.”

Bifocals are most commonly prescribed for those who suffer from presbyopia, which is a condition where the eyes progressively lose their ability to focus on objects that are near. The condition commonly first appears between the ages of 40-50. Franklin wrote to and assured many of his aging friends that his glasses could correct their vision and possibly even extend the later years of their life.

Since the time of Benjamin Franklin’s awesome invention, billions of regular ol’ people have improved their lives through the use of bifocals.