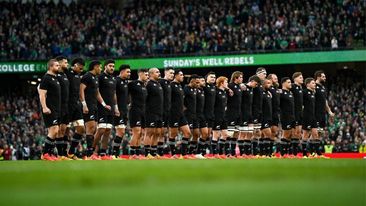 Barrett, 30, failed a head injury assessment in Dublin and was replaced by Richie Mo’unga after 20 minutes during last Saturday’s loss at Ireland.

“At this point he hasn’t trained fully. He did a bit of jogging,” Plumtree told reporters ahead of Saturday’s game at the Stade de France.

“He hasn’t completed all his protocols yet. He’s in doubt I would say, especially with Thursday being our final preparation day.”

Mo’unga is likely to start with TJ Perenara, who started at Landsdowne Road, Brad Weber, Finlay Christie and Aaron Smith the contenders for the No.9 shirt.

Smith, who won the last of his 101 caps in August, rejoined the squad in Dublin last week after missing earlier tour matches due to paternity leave.

“It would have been nice for him to have a couple more games but family commitments around having his new baby boy have prevented that,” Plumtree said.

It’s nice to have him here with his experience. He’s in contention and that’s something for us to consider.

“Brad Weber has played really well on this tour and Finlay Christie is up and coming. We have some really nice choices to make.”

The game at a sold-out Stade de France is a dress rehearsal for the opening match of the 2023 Rugby World Cup.

New Zealand finish their 15-game season, which has included the Rugby Championship being held in Australia as well as Tests in Rome and Washington, in Paris.

They last lost in the French capital in 1973.

“This week has been interesting because when the All Blacks lose, it’s not a greatest environment to be in for the first couple of days. Everyone’s pretty down and grumpy about it.

“It’s been a really long trip, hopefully we can get our game going around momentum and the gainline. If we can do that we can cause some big problems for them.”