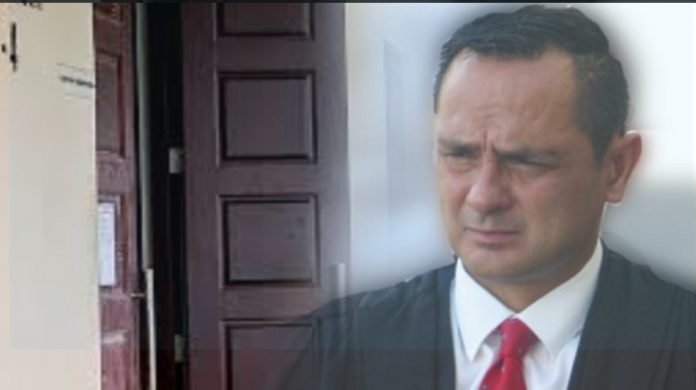 11 July 2019, Apia Samoa. 47 year old David Crichton of Fa’atoia who assaulted and stabbed his estranged wife with a kitchen knife infront of their children was sentenced to 4 years and 8 months by Justice Leiataualesa Daryl Clark as a deterrent for men who still think that it is ok to beat their wives.

In handing down the sentence, Justice Clark said that there continues to be a belief by some men, including Mr. Crichton that the beating or assault of a wife or intimate partner is acceptable.

He warned that the Samoa Courts hold a different view.

“Those views have no place in modern Samoa, if indeed it ever had a place in our society,” he said.

“There is simply no excuse for what you did or for this violence. Where serious violence using a weapon is perpetrated against the spouse or an intimate partner, the offender should be under no illusion that such offending will not be punished with a lengthy custodial term of imprisonment.

“It should be understood by those who might think domestic violence is acceptable, that the Courts hold a very different view.”

David Crichton was charged with one count of assault with intent to cause grievous bodily harm against his wife, one charge of being armed with a dangerous weapon namely a kitchen knife and one charge of threatening words.

The Court heard from the police summary of facts that Mr. Crichton had been separated from his wife for two years and that she was living with her mother and four of their children, while Chrichton also lived with his mother and one of their children at Faatoia.

On Sunday 14th February last year, the victim had spent the day at with all the children at Faatoia on Mr. Crichton’s request that they all spend Valentine’s brunch together.  The victim complied and they had stayed for the afternoon.

However, when it was time for her and the children to leave because to prepare for school the next day, Mr. Crichton got angry, took the car keys off her and demanded that they all sleep at Faatoia.

The victim and the children complied and stayed at Faatoia for the night.

Justice Leiataua relayed the summary of facts to Crichton during sentencing.

“When she called out to your daughter that she is about to leave, you approached your wife and told her to turn off the car and come inside. She reluctantly complied and went inside with the children, and spent the night at Faatoia;

“Sometime in the early hours of the 15th of February, the victim woke up and started to pack her things as they had to leave Faatoia to get the children ready for school;

“She walked to the car got inside and waited for the rest of the children to come to the car.”

The Court heard that while she was waiting, Mr. Crichton came to the car grabbed his wife by the hair and pulled her out of the car. He took the keys and pulled her inside the house.

He threatened his wife by saying, “now you just watch what I am about to do to you.”

The victim, the children and Mr. Crichton were all inside the car when he said “Is that what you all want? to be burned to death?”

He then reversed the car and told one of his daughters to fetch the two kerosene bottles from inside the garage.

As his daughter took too long, he got out of the car.

The victim managed to get out of the car but Crichton ran after her. He caught her and tried to stab her with a knife he had pulled out of his pocket. She tried to resist, there was a scuffle and the knife fell and she was pushed to the ground.

As she lay on her stomach, he grabbed the knife and stabbed her seven times.

He left the victim motionless on the ground where his 7 year old son ran to try and help his mother.

According to the medical report prepared by Dr. Rosanna Amosa, the victim was admitted to the hospital Emergency Department on that morning with seven open wounds.

Other injuries wer noted on her right hand and she remained in the hospital for 5 days.

Justice Leiataualesa spoke about power and control being at the core of intimate partner violence.

“Like many cases of domestic violence between husbands and wives and intimate partners, you were exercising your control and physical power over your wife,” said Justice Leiataualesa;

“This is blatantly clear from your behaviour that night, your intimidation and bullying of your wife and treatment of her prior to you stabbing her;

“In doing so, you grabbed her by the hair and dragged her out of the car, a demeaning and disgraceful act self perpetuated against your wife.”

“The prevalence, seriousness and also the silence remaining around domestic violence in Samoa was discussed in the National Public Inquiry into Family Violence conducted by the Office of the Ombudsman (The Inquiry Report).

“Parts of the relevant findings of that report are;

Family Violence is affecting almost all families in Samoa. People are becoming so accustomed to violence that slapping, kicking, punching, swearing or threatening is now instinctive for many and considered not serious nor fall within the definition of violences and in terms of Intimate Partner Violence, 6 out of 10 women are being subjected to domestic violence at some point in their lives.

Justice Clark said Mr. Crichton would be given a deterrent sentencing not only for him but for others who are considering the same offence.

“The sentence imposed today will therefore be a deterrent sentence given the prevalence of domestic violence, the very serious nature of your offending and the circumstances in which you committed your appauling attack on your wife;

“In my respecful view such a sentence must not only denounce your conduct but also act as a deterrent to you and also others who might consider similar serous offending against their partners;

“Where there are differences in a marriage or intimate partner relationship, those differences must be resolved peacefully and maturely and not through violent means to impose your will.”

Prosecution sought for five and a half to six years as starting point while defense counsel Lefau Harry Schuster requested leniency.

Justice Leiataualesa went further and adopted 6.5 years as starting point given the seriousness of Mr. Crichton’s offending as well as the circumstances of the offending.

He deducted 8 months for Mr. Crichton’s remorsefulness, 4 months for his personal circumstances as well as his victims plea in Court for leniency, and 10 months for his early guilty plea.

Mr Crichton was sentenced to 4 years and 8 months at Tanumalala for the assault of his estranged wife.