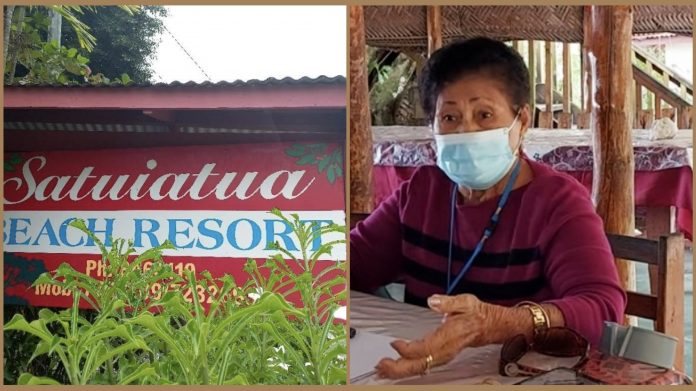 In a press conference with local media at Satuiatua, the 87 year old said she believes that once Samoa are all double vaxxed with boosters, a re-opening strategy that still imposes strict protocols such as negative tests and full vaccinations on visitors, would be the way forward for Samoa.

“We would still have all our border controls, but we would bring in all business owners to make sure they follow a new way of working..”

Leilua says we have to learn to live with the virus and put in place new ways of doing things. “For example, our village has already set aside a safe place to isolate anyone here who contracts Covid-19.. its that building right over there, by our faifeaus house”.

Last week New Zealand announced a similar strategy that opens its borders to the world later this year in October.

During the press conference, Leilua shared insights from decades of experience in the tourism sector.

Leilua spoke about the trickle down multiplier effect of having visitors at her beach fale operation. “In the old days when visitors frequented this place, we would get booked out and have to place some of our clients with villagers who had up-to-standard homes”.

Leilua said the whole village benefitted from visitors flooding their tourist operation. From employment opportunities they were able to provide, to the purchase of locally grown produce and locally made handicrafts.

Leilua acknowledged the efforts of the Samoa Tourism Authority since border closures to encourage local tourism. She says family get together and those who chose Savaii for conferences and different events had provided enough business to survive.

“It’s been two difficult years of trying to survive. But we are ready to reopen,” she says with enthusiasm.