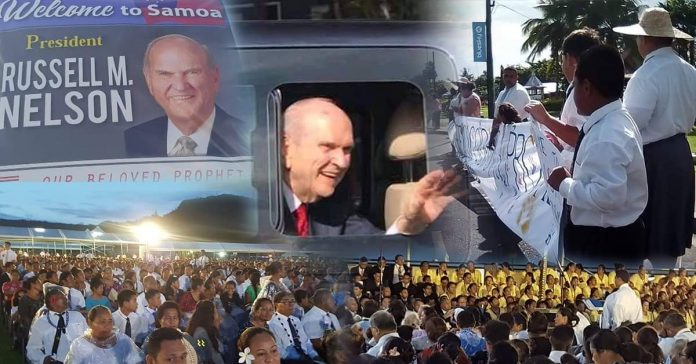 19 May 2019, Apia Samoa. Despite wet weather, over ten thousand members of the Church of Jesus Christ of Latter Day Saints packed the grounds at the Church College of Samoa (Pesega) High School to attend a special service in honor of the Prophet, President Russell M Nelson.

President Nelson and his wife, Wendy, along with Elder Gerrit W. Gong of the Quorum of the Twelve Apostles and his wife, Susan; arrived into Samoa yesterday afternoon as part of their 7-destination Pacific Mission that extends over nine days from Thursday 16 May to Saturday 25 May 2019.

Earlier in the day, Church members lined the roadsides from Faleolo airport to Apia to welcome the prophet, who waved diligently from the car window to greet the crowds throughout the 35 kilometre trip.

People held up posters with messages of love for the Prophet. Seiuli Doris Teo of the Pesega 5th Ward posted a live feed of their members lined up infront of the Pesega mission home with their flags and posters.

President Nelson atrributed the skies clearing up to the prayers of the people who turned up in masses to see him.

“Thank you for your great faith; I wondered if you could do it…;

“You turned off the rain!”

President Nelson spoke affectionately about his previous trips to Samoa, the first being in 1976 as the young doctor assigned to then President Spencer W. Kimball.

“President Spencer W. Kimball was here, and I was here with him as his doctor; and I was serving as the President of the Sunday School for the Church.”

President Nelson recalled that it was during this trip that the people of Samoa had put forth in no uncertain terms, their request for a temple.

“There were nearly 12,000 people there and they all sang to President Kimball.”

“The song had, I think about a hundred verses,” joked President Nelson. “And it went on and on and on.”

“We want a temple in Samoa!”

There was laughter in the crowd as the President went on to say that Samoa was left not with a promise of a temple that night in 1976, but with a challenge to convert more people and to convert their memorized form of genealogy into a written form to be used in the temple.

“And so with that challenge, the Saints in Samoa went to work.”

“And the next year, a temple was announced for Samoa.”

President Nelson also reminded the service that Samoa became the first country in the world to be entirely covered by stakes, with no missing districts.

The 95 year-old Prophet recalled fond memories of Samoan leaders during his first trip.

“I remember Tofilau Percy Rivers, Sam Atoa and many other very dear friends.”

“I returned in May 1992. We came right after the devastation caused by hurricane Val. As our aeroplane came close to the ground we could see palm trees all lying on the ground like match sticks.”

“Many homes, schools and churches had the roofs blown off the top of their buildings. And I remember giving to the Prime Minister Tofilau Eti Alesana a relief cheque for twenty five thousand dollars to help with the restoration of the schools,” recalled President Nelson.

The church leader made special mention of Ollaf Vincent Halleck and his wife Peggy who is currently the President of the Pacific Area.

“It was 1997 when I first met President O. Vincent Halleck and his wife Peggy. And now he is your Area President. Our first Samoan General Authority; and how we love President and Sister Halleck.”

President Russell M. Nelson then offered a prophetic word for his Church members.

“Now the Church of Jesus Christ of Latter Day Saints is growing. Established 189 years ago, it is a restoration of the New Testament Church of the Lord.”

“This Church, when restored to its fullness will prepare the world for the second coming of the Lord.”

President Nelson prophesied that the holy work of the Church would be increasingly opposed by Satan in the months and years to come.

“The Lord has asked me to let you know tonight, that we have a solemn duty to prepare our people for the difficult days that lie ahead.”

He quoted from the Aposlte Paul’s letter to Timothy (2 Timothy 3:1-5).

“In the last days perilous times shall come, where men shall be lovers of their own selves, covetous, boasters, proud, blasphemers, disobedient to parents, unthankful, unholy, without natural affection, trucebreakers, false accusers, incontinent, fierce, despisers of those that are good;

“They will be traitors, heady minded, highminded, lovers of pleasures more than lovers of God; having a form of godliness, but denying the power thereof,” quoted President Nelson from the King James Version of the Holy Bible.

The head of the Church of Jesus Christ of Latter Day Saints then reiterated Paul’s prophesy that “all who will live Godly in Christ Jesus shall suffer persecution” adding that members in Samoa will not be immuned from Satan’s opposition.

He drew similarities from the warnings of the Prophet Isaiah where is says, “Woe unto them that call evil good.” (Isaiah 5:20)

“I’ve heard that scripture so many times that I didn’t realise until recently that I was living in that day!”

“More and more people, all over the world are calling evil good, and good evil.”

President Nelson quoted from the Book of Mormon to offer encouragement that the boundaries between good and evil can still be discerned by God’s people.

“For behold my brethren, it is given unto you to judge that you may know good from evil. The way to judge is plain. That you may know from the perfect knowledge as to daylight is from dark night.” (Mahonri 7)

“Then he gave a lesson that applies to us here tonight; the spirit of Christ is given to every person. That he or she may know good from evil.”

President Nelson concluded, “So you dear beloved brothers and sisters, who are willing to take upon the name of Jesus Christ. Prepare to be persecuted, even every day.”

“The Apostle Paul gave us this great counsel through revelation. He said “from a child you have known the holy scripture. Which are able to make you wise for salvation through faith in Christ Jesus.”

Prophet Nelson quoted from 2 Timothy 3:15, “All Scripture is given by inspiration of God, and is profitable for doctrine, for reproof, for correction, and for instruction in righteousness.”

“This is why want you to be anchored in scripture; not only in Church but in families. Please protect your families from the deception that you’ll see in the future.”

The President and his delegation travel on to Sydney, Auckland and Hamilton before Fiji, Tonga and Tahiti.