It takes hard work to retain the Taula shield throughout the season and BBE Vaiala have been seen running up the Mount Vaea trail this week in preparation for this Saturday’s shield match against Apia Maroons.

In last Saturday’s shield match, Vaiala’s approach to blend the experience of veteran players with ellusive youngsters paid off in a well fought match to defend the Taula shield against a passionate Lupe o le Soaga side.

Speaking to Samoa Global News after the match former Manu Samoa International Coach Masoe Steven Betham said most of the Vaiala side are Under 20’s from last year.

“There’s a few old heads in there who are needed to guide them,” said Masoe.

Vaiala fielded Under 20’s captain East Timor (ET) Faamatuainu at No.8, and he was flanked by two more youngsters – Mark Tusigaigoa at 6 and Fuli Faafouina in the No7 jersey.

Masoe said the trio have transferred their combination from Under 20’s to Senior A’s with ease.

“They’ve played together for two to three years now, coming through Vaiala’s development in the Under 20s, and their combination was proven today”, said Samoa’s former 7’s HSBC series championship coach.

Masoe said Blackie also fielded youngsters just 22 years old such as Wesley Patu and Meleniuma Afatia, who are the future of the club, selected alongside more experienced players to maintain balance. 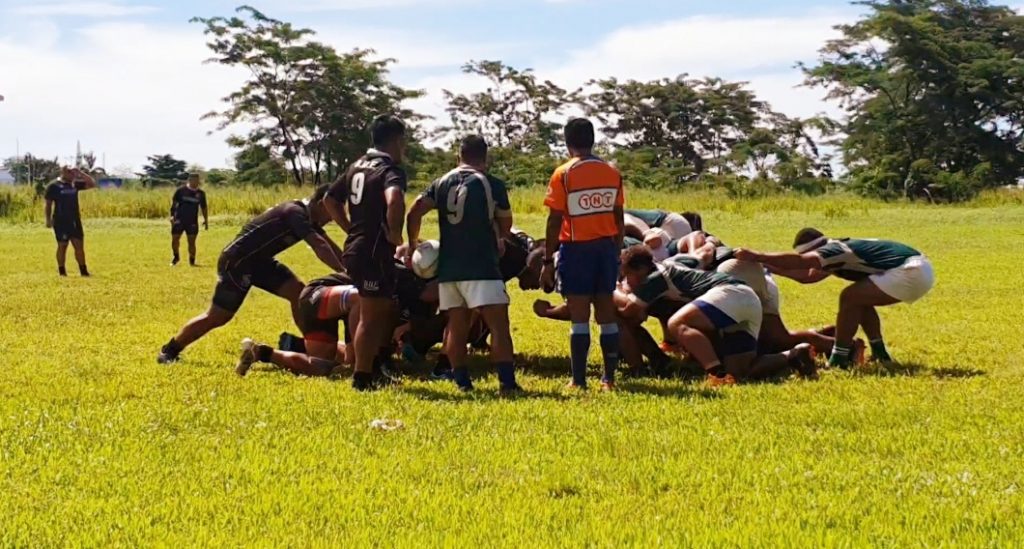 The game was closer than the final score of 35-21 reflected, with both teams tied on 3 tries each until the last quarter, when Blackie shifted gears and scored two quick tries to secure the win.

Magiagi played with heart, led by their captain Iakopo ‘Jake’ Leifi who scored Lupe’s first try in first 10 minutes, giving his side an early 7-3 lead with the successful conversion off the boot of Fomai Fomai.

Getting the ball from a forward moving scrum within 10 metres of the tryline, Patrick Faapale wiggled his way through gaps in the Magiagi defense with ease,  to put his side in the lead by 8-7, as he was unable to convert his own try.

Lupeolesoaga stayed in the match for much of the first half until a clean lineout ball got to Samoan boxing gold medalist Hugo Fata, who stepped two Magiagi defenders, creating space for Malu Falaniko to score under the post and covert his own try.

Magiagi maintained good possession and territory for the rest of the first half, but missed several chances to score again before the halftime whistle. Lupe went to the break still very much in the game, trailing by 15-7.

Masoe admits Blackie were lucky at times, with Magiagi’s attack showing up a few lapses in their first half defense.

The Taula shield match between Blackie and Maroons will kick off at the SRU HPU grounds at 3pm this Saturday.