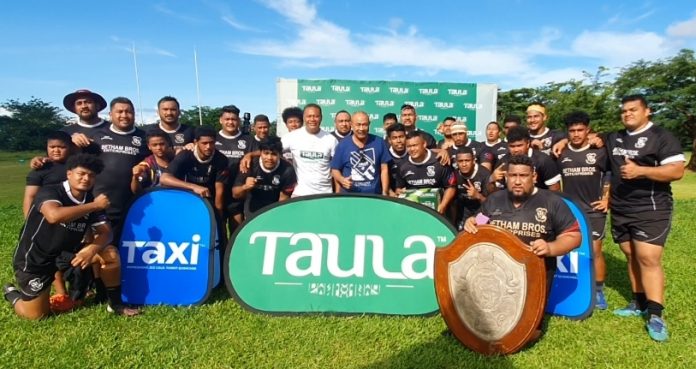 Blackie were too strong for the Roosters in the first week of Apia Rugby Union’s 15-a-side tournament shield match at SRU grounds this afternoon.

SSAB Moamoa Roosters put up a good fight in the first half, with two tries to their 20 year old prop Aitasi Michael Tuvaifale. BBE Vaiala responded with 3 tries of their own to make the half time score 28-12.

Roosters returned in the second half and scored first to close the gap to 28-17.  That was the only chance Blackie would give, as their forwards settled in to dominate scrums and lineouts for the rest of the half. They would score three more tries to secure the 49-20 win.

SSAB Moamoa Roosters three tries all went to prop Aitasi Michael Tuvaifale who is one-to-watch at only 20 years of age.

“He has been identified and is under the SRU High Performance squad so yes, Aitasi has a great future ahead of him,” said the head coach of Moamoa Senior A’s.

Vailele, coached by former Manu Samoa 7’s high-ball jumping expert Simaika Mikaele, will be challenging the shield next Saturday at the HPU grounds of the Samoa Rugby Union.