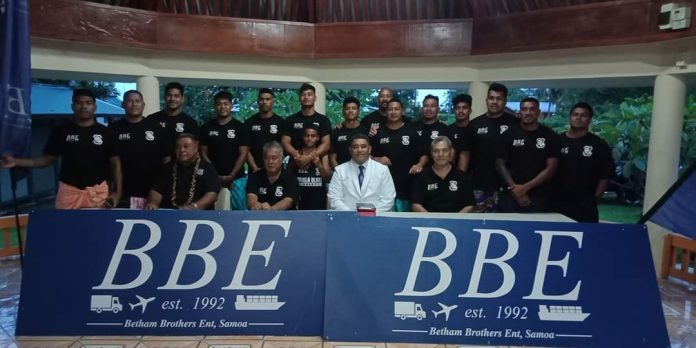 Defending champions of the Tupua Fred Wetzell Cup for the Vailima Marist International Sevens tournament are set to face the first day of matches.

The jersey presentation for BBE Vaiala was led by a special ceremony of prayer and blessing by Reverend Iese Uele.

After a grueling selection process, the decision for the final squad was not easy for the club’s management given the depth of young players attracted to the club each year.

“It was definitely a challenge due to so many skilled players, but we have a solid final 13 selected to defend the Cup this year,” said Head Coach Lelepa Niue Titi who is assisted by Viliamu Punivalu this year.

Team Manager Orana Senara says they will remain humble and focused as they go into day 1 pooled with three tough sides in Moataa, Satalo and Ulutogia.

The team will be captained by veteran Patrick Faapale and includes three players in Lima’s national 7’s squad – David Tavita, Tipa Sapeti and Malo Luteru; while Malu Falaniko and youngster Mark Tusigaigoa were named in the backup squad.

The side is well supported by the village and church community and they call for all supporters to come down to Apia Park and cheer on the Boys in Black.