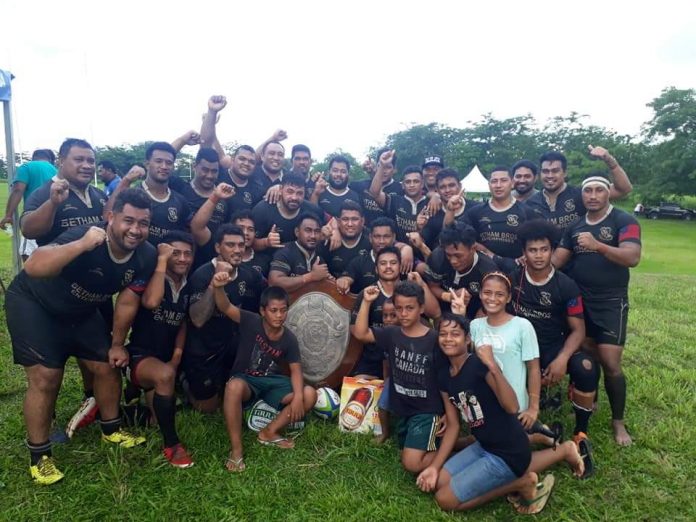 12 January 2019, Apia Samoa. The BBE Vaiala Ulalei rugby team, known as the Blackies, has retained the shield for the Apia Rugby Union with a narrow win over traditional rivals, Moataa.

In a nail-biting match at the Samoa Rugby Union grounds at Tuanaimato Vaiala came out on top at the final whistle with a 22-17 win.

“Taumeasina Island Resort Moataa” were first to score and also led 12-8 at half time, however, a penalty try awarded by the referee 12 minutes into the second half  took the Blackies to a  15-12 lead for the first time in the match.

The score was held at 15-12 until the last 8 minutes of the game, when Vaiala wing Hugo Fata finished off a backline move to score a try and extend Blackie’s lead to 22-12 after a successful conversion.  But nervous fans watched on as Moata’a responded within 4 minutes with a try by Malo Nofoagatotoa bringing the game back to 22-17.

More than 200 fans from both villages cheered their teams on as the Taumeasina Island Resort Moataa side fought hard in the final minutes of the game, looking like they were going to score again in a dying-minute scare and keeping fans tensed right up to the final whistle.