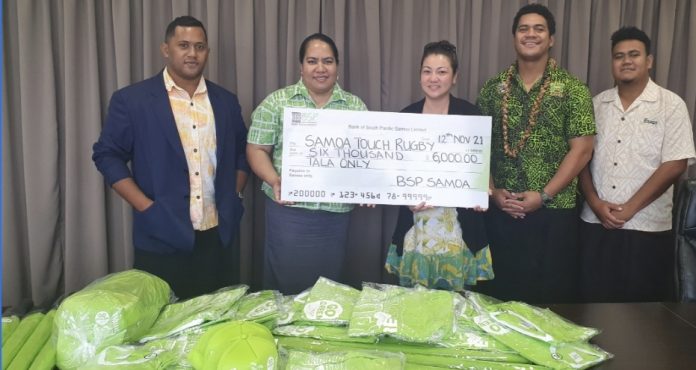 BSP Samoa has come on board to support the Samoa National Elite Touch Champion 2021 with a sponsorship of $6,000 cash and merchandise valued over $1,000 tala, presented to members of the Samoa Touch Rugby Association last Friday 12th November 2021.

Three franchises, Vaea, Tagaloa Lagi and Nafanua will compete in the National Elite Touch Champion tournament set to start this Saturday 20th of November at the ACP Stadium Lotopa, with the final on the 4th of December 2021.

Handing over the donation in an official ceremony at BSP Samoa head office last Friday, Manager e-Banking for BSP, Maiava Iaeli Tovia-Leota said BSP takes great pride in supporting organisations and causes that are important to the bank’s customers especially the youth of Samoa.

“Touch Rugby is one of the most played sports in our country and we recognise the ongoing commitment by the Samoa Touch Rugby Association to initiate and organise annual tournaments, said Maiava. “These activities keep youth engaged socially, promote health awareness and develop talent amongst both men and women in sports.”

“Samoa Touch Rugby is grateful to BSP for continuing to support our efforts in developing touch rugby,” said Taupau. “We are in challenging times due to COVID-19, but BSP has once again provided their support to help us deliver our game plans for this year, and for this we would like to thank them.”

Taupau was joined by Laulu Gloria Takazawa to receive the donation on behalf of the Samoa Touch Association.

Samoa Touch Association President Mailata Michael Wulf said the tournament is to cultivate the growth of touch at all levels, serving as an outreach initiative for the community.