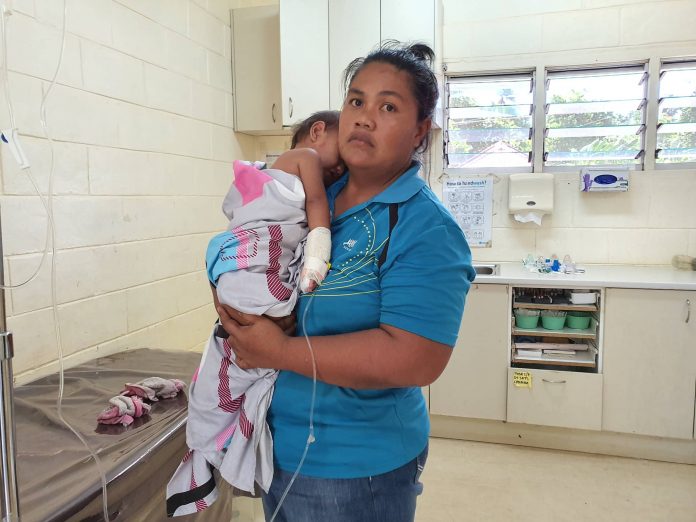 Samuelu and Pelea Sa’utui of Vaie’e took their 10-month old baby girl, Faaiu, to the Saanapu District Hospital on Monday only to be given a prescription and sent home.

According to her Dad, Faaiu had a high fever and was coughing when they took her in.

Samuelu says that on Monday, his daughter was dignosed with pneumonia, issued a prescription and sent home to take the medicine.

Samuelu says Faaiu was still eating well on Monday, but yesterday (Thursday) morning, they had noticed her condition had deteriorated and baby also stopped feeding.

The couple said that they then took their daughter back to Saanapu yesterday morning (5/12/2019) where a “specialist doctor” (fomai faapitoa) issued a prescrition, and released them to go home.

Samuelu says they were given a prescription for medicine that was not available at the pharmacy.

Staff at Saanapu say that the pharmacy service was disrupted yesterday. They did not come out, and they think it was due to the shut down for vaccinations.

Turned away again, Samuelu then decided to take his daughter to Poutasi District Hospital to see if they have the prescription medicine.

This is where they caught up with the Samoa Global News team yesterday afternoon.

At Poutasi, the couple were then told that baby Faaiu may have contracted the measles.

“I said to my wife, it’s better to take her to Poutasi before it gets dark.”

Samuelu says he is confident now that his daughter is in good hands at Poutasi District Hospital.

Samoa Global News contacted the Saanapu District Hospital for a comment, but was told that the specialist doctor in unavailable and visits once a week on a Thursday.

Three babies were discharged this week from Poutasi District Hospital, fully recovered from the measles.