Three week old Camilla Elizabeth Maui’a has fully recovered from the measles and is now at home in Fausaga Safata, reunited with her two older sisters.

Less than a month old, Camilla has been the youngest baby admitted to Poutasi District Hospital since the outbreak. 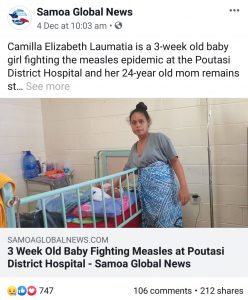 Filirosa and her husband MacGyver Maui’a said they had read all the messages posted by our readers in Samoa and around the Globe, and thank everyone for their prayers of support.

“Thank you very much for the prayers, we felt the presence of the Lord through all the prayers.”

“It was hard to watch her struggle with the measles especially her breathing and not wanting to eat but I thank God for healing my baby.”

Filirosa adds that she is grateful to the nurses of Poutasi District Hospital who took care of them.

“I also thank the nurses Sofia and Numi (Fenumiai) and all the staff here at Poutasi for their help.”

The couple live with their three daughters and Filirosa was glad to be home for her older girls, 4-year-old Palepa and 2-year-old Salome.

“They are very happy to have their Mom back home,” says MacGyver.

Camilla had shared a room with 8-month old OnzeJune Celestial Pitoau during her stay in hospital. Fully recovered from the measles, baby OnzeJune was also discharged from Poutasi District Hospital earlier this week.

Her Mom Vanessa Malolo says baby had recovered slowly when they went home, but is now alert and eating well.

“Yes she’s having soups and fruits and she’s taking it all well without having to vomit,” says Vanessa.

Many babies and young children have been successfully treated at Poutasi District Hospital as well as other district hospitals across Samoa since the outbreak.

Two more babies who were at Poutasi when Samoa Global News visited on Friday, were discharged on Saturday (yesterday) morning.

Please pray for the two remaining babies at Poutasi tonight.

Faaiu Samuelu, 10 months old from Vaiee was clinically diagnosed of measles and admitted by Poutasi hospital staff on Thursday afternoon. Her parents had taken her to Saanapu District Hospital on that same morning, but was diagnosed by a doctor with pneumonia and sent home with a prescription for augmentin (See SGN article).

Faaiu’s father, Samuelu says they are grateful that his daughter has been admitted and has confidence that she is now in good hands. Faaiu is being treated for pneumonia as she battles the measles.

Faaiu’s Mom, Pelea Samuelu says baby is recovering slowly at Poutasi and asks for our prayers.

Jayce and his mom Su’e have been at Poutasi since Tuesday. He is also recovering well.

Su’e says his rash has come out strong and Jayce is fighting but asks for prayer.

“The nurses said it’s a good thing, a sign of letting us know that his measles is slowly coming to an end. But it is just his coughing”, says Su’e.