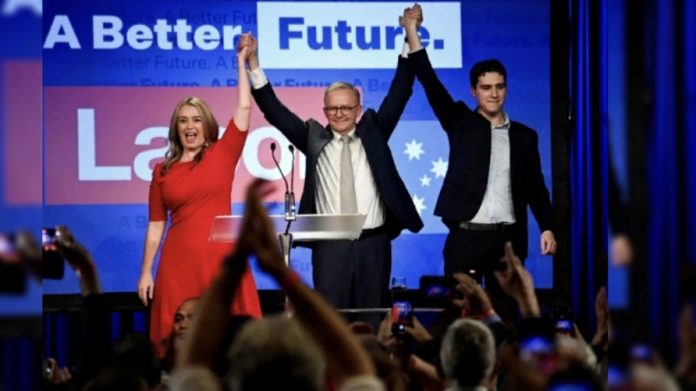 Anthony Albanese will be Australia’s next Prime Minister, leaving the Coalition in disarray after it lost more than a dozen seats to Labor and independents in an election that has transformed the country’s political landscape.

Declaring victory shortly before midnight on Saturday, Albanese thanked voters for the “extraordinary honour” of becoming the nation’s 31st prime minister, and said he would work in government to bring Australians together.

He pledged to implement the Uluru statement of the heart in full Uluru – which includes constitutional recognition for Indigenous Australians – promised “kindness” to those in need, and declared that “together we can end the climate wars”.

“Tonight the Australian people have voted for change. I am humbled by this victory and I’m honoured to be given the opportunity to serve as the 31st prime minister of Australia,” Albanese said.

The centre-right coalition had faced mounting pressure for their handling of cost-of-living pressures, the pandemic and climate change.

“Tonight, I have spoken to the leader of the opposition and the incoming Prime Minister Anthony Albanese, and I’ve congratulated him on his election victory this evening,” Morrison said at a televised speech in Sydney.

Morrison added he would stand down as leader of the Liberal party following the  election loss.

“The Australian people have voted for change. I am humbled by this victory,” Labor leader Anthony Albanese told his supporters in Sydney on Saturday after leading his party to victory following nine years in opposition.

“I think people have had enough of division, what they want is to come together as a nation and I intend to lead that,” Albanese said earlier in the day.

Labor has so far secured 72 seats, four seats short of the majority in the 151-member lower house of the parliament, according to partial results.

The centre-right coalition, led by Prime Minister Scott Morrison, has so far secured 51 seats. Morrison conceded defeat late on Saturday even though vote counting was still under way.

Final results could take time as the counting of a record number of postal votes is completed.

The results have been notable for a strong performance by independent candidates, many of whom ran in traditional Liberal seats and campaigned on the issue of climate change.

If Labor cannot secure an outright victory, then Australia will have a hung parliament for the first time since 2010. Before that, the last hung parliament occurred in 1940.

Anything less than 76 seats in the lower house means the winner will need to negotiate with smaller parties and independents in order to try and form a minority government.

Morrison had hoped to become the first prime minister to win two elections in a row since John Howard in 2004. The Labor Party clinched its first electoral win since 2007.

Voting is compulsory in Australia and just more than 17.2 million people have enrolled to vote, according to the Australian Electoral Commission (AEC).

Record numbers of voters cast their ballots at early voting centres or via postal votes, and more than half of the total votes had been cast by Friday evening, according to the commission.

Australia uses a preferential voting system rather than the simple majority that’s applied in countries like the United Kingdom and the United States, and voters get to rank their candidate choices on the ballot paper.

Australia’s new Prime Minister promised to bring the country together. “I want to see our common purpose and promote unity and not fear. Optimism, not fear and division..

“It is what I have sought to do throughout my political life and what I will bring to the leadership of our country..

“I want to find that common ground where together we can plant our dreams, to unite around our shared love of this country, our shared faith in Australia’s future, our shared values of fairness and opportunity and hard work, and kindness to those in need.”