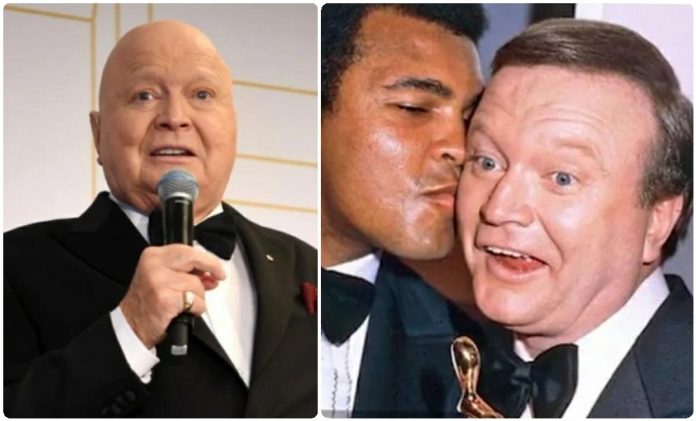 The sad news was confirmed by entertainment reporter and friend Peter Ford on Saturday night. Ford says he was asked by Newton’s wife, Patti to convey the news.

“I have very sad news ….Showbiz icon Bert Newton has died at age 83,” he wrote on Twitter.

Bert Newton has died age 83 after having his leg amputated earlier this year due to a life threatening infection.

Bert Newton died while in palliative care at a private hospital after having his leg amputated earlier this year due to a life threatening infection.

The last photo Bert Newton’s devoted wife shared of the 83-year-old television legend was captioned “that’s what happiness is”.

Newton has long been regarded as one of Australia’s most iconic and much-loved personalities.

With a career that spanned almost 70 years, Newton started as a radio personality before making his name in television.

He was well-known for his long-running associations with TV legends Graham Kennedy and Don Lane.

Newton and Kennedy’s life-long professional association started after they filmed a live TV commercial together on In Melbourne Tonight in 1959.

From there, the pair made many joint TV appearances, before teaming up on Graham Kennedy’s Channel 9 Show in 1960 and 1961.

In 1975, Newton was cast as Don Lane’s sidekick and “barrel boy” on The Don Lane Show.

It was here that the entertainer earned the well-known nickname “Moonface”, and he remained a much-loved part of the variety show until it ended in 1983.

“Don saved my career, and I’ll never forget him for that. He came into my life at a pretty low moment professionally,” Newton told Woman’s Day in 2019.

“We’d never worked together before, but the moment those cameras came on, we clicked. Working with Don was magic. Actually, Channel Nine didn’t want me to do Don’s show. I’d been so associated with Graham Kennedy, they were looking for someone else, but Don insisted.

“Don was such a generous performer, he didn’t care who got the laughs so long as they were there. Don was an all-rounder – he could sing, had a great sense of comedy and he was a terrific interviewer.”

From there, Newton went on to front a range of shows including New Faces, before becoming the host of Channel 10’s Good Morning Australia in 1992.

The role revived Newton’s career, and the show enjoyed a successful 14-year run before it was cancelled in 2005.

From there, the TV star hosted Bert’s Family Feud, 20 to 1 and What A Year, as well as making several other appearances on various shows.

Newton also starred in a range of stage productions during his remarkable career, most notable being his role as The Wizard in Wicked, which played from 2008 to 2011.

His achievements in the entertainment industry earned him a host of awards and recognitions.

In 2006, Newton was made a Member of the Order of Australia “for service to the entertainment industry as a presenter, actor, comedian, and through support for a range of medical research and charitable organisations”.

He was also named as a Member of the Order of the British Empire in 1979 for his dedication and service to the performing arts.

However Newton is probably best remembered for his career-long association with the Logies.

He was also nominated for the Most Popular Light Entertainment Personality gong in 1993 for his role in Good Morning Australia.

Throughout his stellar entertainment career, Newton’s wife Patti has been by his side.

The couple tied the knot in 1974 after meeting through work and went on to have two children, Matthew and Lauren.

“Patti is my oldest friend,” Bert told Now To Love at the 2018 Logie Awards.

Newton’s sad passing is sure to be hard on Patti, who once said that life without her husband of more than 46 years would be “difficult”.

“We lived and worked everything that was happening on television, we’ve spent a lot of time together,” she once told Now To Love.

“If anything happens to either of us, whichever one it is will find it very difficult because we’ve been in one another’s pockets for well over 50 years.”